Kissinger Contines the Disgraceful Taboo: No Mention of Israel’s Weapons of Mass Destruction 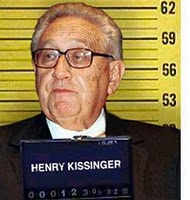 Dr Henry Kissinger, who should be spending his fourth decade in prison for crimes committed against humanity in Vietnam, Chile and throw in Indonesia, has written yet another op ed for the Washington Post. It is titled, “Iran Should be Obama’s Top Priority.” The article is without substance or even a clarified major point yet seems to advocate war against Iran should diplomatic and murderous sanctions to stifle horizontal nuclear proliferation fail. Reminiscent of George Frost Kennan’s senseless psychological portrayal ofÂ putative Soviet expansionism in Foreign Affairs, “Sources of Soviet Conduct” X-Article and the Long Telegram, Kissinger refers to “the apocalyptic strain in the Iranian theocracy.” Of course there is no parallel mention of the Israeli theocracy based on the supremacy of Jewish-religious establishment of the “democratic” state of Israel.

The former secretary of state under PresidentsÂ Nixon and Ford is well aware that Israel possesses a frighteningly enormous nuclear stockpile that encompasses both fission and most certainly fusion weaponry. Israel has perhaps 100s of nuclear warheads, signficant supplies of plutonium and uranium and the capacity to deliver such monstrous weapons either by rocketry or by aircraft. Israel has refused toÂ ratify the NuclearÂ Non-Proliferation Treaty (NPT) because it does not wish to disarm or allowÂ International AtomicÂ Energy Agency inspectors into Dimona and other yet to be declared sites.Â Yet the onus is on Iran to abandon its nuclear-development programme and to desist from using its technological prowess to enrich uranium. Iran is a ratifier of the NPT and does allow some IAEA inspections.

Dr Kissinger in growing stridency and frankly attempting to obscure his basic message, “GET IRAN,” writes, “We cannot afford another strategic disaster.” While he does not identify what he means by “another,” I do not see how Iran’s nuclear capacities can be addressed with effective diplomacy without engaging the Israeli nuclear deterrent. It is obvious to me the “Free World” wishes to retain aÂ permanent Israeli nuclear monopoly in the region. It is unwilling to address the possibility of a real deal. A nuclear free zone in the Middle East. It knows that Israel would never go along but only pressure on Iran is forthcoming from the US and its European Union acolytes.

Israel for reasons of religious sympathy alone has not earned such unusual support and pampering from the US. Iran counts; its civilisation is much older than Israel. Its educational system while not on a par with Israel is one of the more advanced in the Muslim world. Its women have relatively more rights than many Muslim lands and it has not attacked or invaded a nation. It does not occupy territory to which it does not belong. It has issued a FATWA in which a nuclear option in the area of weaponry has been rejected. I do not know if Iran is pursing a nuclear weapon capability. Perhaps it is. I do know as I have written with regard to DavidÂ Gregory’s Meet the PressÂ silence on the Israel’s nuclear-club status, that the taboo on discussing this known and absolute fact, is an impediment to reducing and ultimately removing these evil systems from the Middle East andÂ our planet.

The reason why Kissinger and others as previously noted will not mention, concede or discuss Israel and its nuclear weaponry, is because of bias against Islam and those nations that dare seek a balance of power with Israel. Kissinger sees the Middle East as one of Cold War agency: back Israel regardless of its crimes, cozy up to theocratic states with oil, prevent a rival from having the capacity of exerting its own will in the region. Kissinger, a Nobel Peace Laureate, does not wantÂ realÂ peace in the region but a realist hegemonic peace; he wants an American-Israel hegemony. I want to avoid another “strategic disaster” as we saw on August 6 and August 9, 1945 over the skies of Hiroshima and Nagasaki. There must be no other use of these weapons on other humans that is always possible with their continued deployment and perverse status they confer upon the nuclear club..