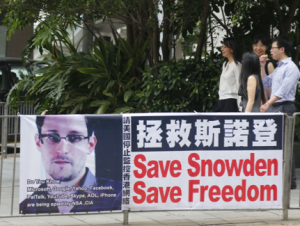 These are some thoughts seriatim:

1) Don’t trust Senator Dianne Feinstein. The eighty-year old senator from California has a long history of opposition to civil liberties,Â dissent and protest. This person wants to criminalise flag burning as if the Constitution does not protect such speech. She wanted to amend the 1788 document, as ratified, to ban such honourable and legitimate protest. As chair of the Senate Intelligence Committee, she is part of the criminality of global espionage on the part of the US government. Her desire to take away the freedom of Mr Snowden is consistent with his protest against the diminution of freedoms that Feinstein and other senate elitists have participated in.

2) While press reportage is now cheerleading with the Obama administration to catch the heroic defender of our freedoms, the fact remains we are a police state. Democratic Hong Kong should be the envy of the world in respecting the right of travel of an American citizen. The revocation by the State Dept. of his passport is egregious. He is a model American, not the ugly American, who should be allowed to take his crusade for openness, anti-authoritarianism and constitutional adherence freely throughout the world. The press gets to report on the N.S.A. leaks and then joins the lynch mob to apprehend the hero.

3) If Russia can withstand American threats from militaristic warmongers such as Senator Lindsey Graham (R-SC) and Secretary of State John Kerry, it will demonstrate that despite our ruthless global invasion of the Earth’s populations right of privacy, there are some countries that will resist such actions; that recognise the need to protect and nurture human-rights activists such as Mr Snowden; and that will not cave into the vicious, bullying of the United States.

4) Note the bipartisan support to destroy Mr Snowden and silence dissent in this country. The Espionage Act was a ruthless law passed in 1917 that was used to stifle dissent: the great Eugene Victor Debs and Charles Schenck were prosecuted under that law. History has not looked kindly on that law and the Supreme Court’s eagerness to uphold the incarceration of Debs and Schenck inÂ such despicable reasoning that printing an anti-conscriptionÂ pamphlet is equivalent to shouting fire falsely in a crowded theatre. Justice Oliver Wendell Holmes, an enemy of civil liberties, wrote in his opinion that antiwar protest such as a pamphlet or aÂ speech outside a prison with political prisonersÂ represents a clear and present danger to national security. This icon of liberal jurisprudence was the clear and present danger that he belatedly recognised in Abrams v. US (1919).Â The Obama administration is using the same odious law to seek the extradition of Mr Snowden. The only real fire that is present here is the NSA and its indulgent FISA court collecting my phone calls and much of the world’s internet trackings. Who do these folks think they are: the chosen ones of American exceptionalism to spy on innocent people throughout the world?

5) May Edward Snowden be granted asylum in a democraticÂ nation with liberal values and the respect for the law. Not this fascist country with its Hiroshimas, genocide in Vietnam, invalidating voting-rights lawsÂ and slavery-Jim Crow lasting for centuries. May Mr Snowden be protected as a heroic, epic figure who is trying to preserve what little freedom is left in this nation.