Secretary of State John Kerry is a Disgrace and a Hypocrite

Posted on September 1, 2013 by Peter Kirstein

Now Secretary Kerry wants to kill babies and women in Syria! This war criminal should be tried at The Hague and named in an international arrest warrant. This guy who used the Vietnam War dead as his cynical rise to power during the 1970s when he asked, who would be the last to die for a mistake is a typical Democrat. A warmonger, a racist who just adores Israel but makes no mention of its use of WMD in Gaza in their extermination campaign in which a UN study group concluded Israel committed war crimes. Nothing on Israel. If the warmonger Kerry were presented with evidence that Israel used chemical weapons, or cluster bombs, or uranium-depleted weapons, he would say nothing. We know that the US ignores Israel’s violation of international human rights law and the laws of war. We know the Kerry Doctrine of moral selectivity when it suits our “national security interests,” is arrogant and destructive of international peace and security. 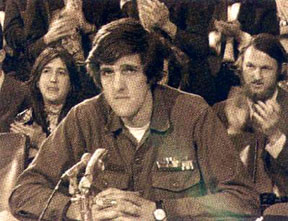 The “spokesperson for the antiwar movement” Kerry admits to war crimes in Nam and now wants them in Syria so he can preside over the muscularity of American dominance. Note this guy sees the world not as a community but as a plaything for the US to control. Who the heck does he think he is!?: “We rationalized destroying villages in order to save them. We saw America lose her sense of morality as she accepted very coolly a My Lai and refused to give up the image of American soldiers who hand out chocolate bars and chewing gum. We learned the meaning of free fire zones, shooting anything that moves, and we watched while America placed a cheapness on the lives of orientals.”

Warmonger, fiend John Kerry our secretary of state with his hundreds of millions, limos and life of privilege and comfort, voted to kill Iraqis AND Americans in the Nazi war of aggression in 2003. The Senator from Massachusetts at the time voted to authorise the use of force against Iraq. He supported the Bush war criminal lies that President Saddam Hussein possessed ABC weapons that included an atomic-bomb weapons programme and chemical and biological weapons. Why did Kerry the hypocrite vote for war in 2003? Because he was going to run for president in 2004 and did not want to appear soft on “national-security issues.” So what happens when the war in Iraq is prolonged despite claims of “Mission Accomplished,” and American casualties escalate, well Mr Kerry, Democratic candidate for president of the United States, now becomes once again a antiwar opponent against Bush. He lost thank god to Bush. I will take a war criminal GOP reactionary over a former antiwar fraud who changes his positions on war when it suits his blind ambitions.

What Secretary Kissinger er Kerry should know is that he has not presented any evidence that Syrian PresidentÂ Bashar al-AssadÂ used chemical weapons nerve agents (CW) in Syria. Claiming sarin was used from his mouth is probably a lie. We do not know who used CW; we do not have a UN report; we do not have independent verifiable information. If CW were used, Mr Kerry hasÂ not presented any evidence that demonstrates that CW are more lethal and destructive than 500 lb high explosive bombs, cruise missile warheads, drone attacks and the like. Yes CW are prohibited for use with the 1925 Geneva Protocol and even their possession is banned with the CWC. Has Mr Kerry told the American people that the US is in violation of the Chemical Weapons Convention with its stockpiles of CW at multiple sites across the US? There is a provision for slow destruction of these stockpiles but the US is not in compliance with this treaty in my opinion.

Also does Secretary of State Kerry, as he rants about Hitler and Assad as soul brothers, and cries about little Israel while it butchers and encircles with its concentration camp a nation of oppressed Palestinians in the West Bank, consider everyone stupid and unaware when he does not mention that war against Syria even with Congressional authorisation is a violation of the UN Charter.Â The United Nations Charter proscribes and bans any state violence against another state, any war, any use of military force in all cases except for bona fide self-defense (Article 51). If the Security Council authorises force for reasons other than self-defence as it did in Korea (1950) and Libya (2011), that would at least legally if not ethically justify the use of weapons to kill other human beings. (Articles 39 and 42). There are 15 countries on the Security Council and you need nine, a super-majority, to go to war including the consensus of the P5 who have a veto. US, UK, Russia, China and France. The other ten members who rotate off five at a time, every two years, cannot exercise a veto.

It is not enough for President Barack Obama to seek congressional authorisation; he needs UN approval or the war would be a violation of international law. In the 21st Century we do not need the 69 year old Kerry, who is stuck in the Cold War rhetoric of the past, telling us that the US is the policeperson of the world. We do not need to use war as a means to deter others from doing the wrong thing. We need to rely upon international regime systems such as the World Court, the International Criminal Court, and the UN, not unilateralist racist statements about how the world is at risk with the use of chemical weapons while American savagery and mass murder with conventional weapons is apparently moral, ethical and good for business.