David Gregory is not the Meet the Press moderator we were entitled to after the shocking death of Tim Russert. Mr Russert had nuance, was not blindly anti-Muslim and brought a progressive, humanistic streak to journalism.Â He was balanced but when he tilted ideologically, it wasÂ on behalf of the weak and downtrodden.Â Gregory, on the other hand, as seen on Meet the Press’s November 10 programme, was basically a spokesman for Likud Party Chairperson and militant, prowar Israeli Prime Minister Benjamin Netanyahu. No one obviously with influence on this man has even suggested that his militant zionism and xenophobia needs to be harnessed or at least balanced with equal time given to other prespectives. I can think of no FOX news anchor that is this unabashedly prejudiced and frankly arrogantly dismissive of the need for peace and reconciliation in the Middle East. 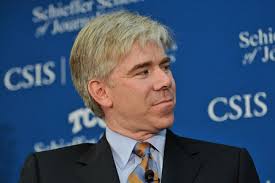 He was trying in his interview with Secretary of State John Kerry to goad him into abandoning the nuclear talks with Iran and threaten military annihilation of the Islamic Republic of Iran. He wanted reassurances, now this is a journalist mind you, that the US would go to war in the Middle East to prevent a putative Iranian nuclear weapon’s programme that might lead to an atomic bomb. Question after question disparaged the moderate Iranian President Hassan Rouhani, who has spoken by phone with President Obama. Gregory quoted the Iranian hating Israelis in suggesting the president of Iran could not be trusted, that any agreement with Iran was a chimera of their true intentions. Gregory insisted that sanctions not be lifted and that Iranian suffering continue as a result of their supposed but never confirmed nuclear weapons’ programme.

FACT CHECK: Meet the Press refused to admit what everyone else knows: that Israel is a major nuclear power. Israel has nuclear weapons, both fission and fission-fusion-fission thermonuclear warheads,Â but the aggressive Zionism of Gregory deceitfully ignored this. If Gregory were responsible and introduced into his interview Israel’s current nuclear stockpile, it would have undermined the image of a defenceless Israel bound for nuclear destruction. It would have undermined the basic argument of Israel: that Iran poses an existential threat if it acquired a nuclear capability. Deterrence is not only a Robert McNamara theory, but also has some relevance in that nations who would contemplate a first-strike attack against a nuclear power, might indeed suffer the consequences of a second-strike retaliatory exchange. Hence, they would be very cautious inÂ initiating a mutual exchange of destruction. Until and unless the Israel Lobby with its spokespeople posing as news journalists such as David Gregory, enter into the equation the Israel nuclear arsenal, no serious discussion of either Israel’s national security needs or real progress in denuclearizing the Middle East can take place.

FACT CHECK: Iran has the right under international law to conduct neutron fission of uranium atoms. It has the right under the NPT (Nuclear Non-Proliferation Treaty) to enrich uranium and to pursue a peaceful nuclear programme. By peaceful, it is required to accept I.A.E.A. (International Atomic Energy Agency)Â safeguards against diverting its nuclear assets in making a weapon through greater enrichment of U-235 isotopes or reprocessing plutonium from uranium irradiation. To insist that Iran not conduct uranium enrichment of U-235 or harness Pu-239 would be discriminatory and in violation of the 1968 N.P.T.

David Gregory may smile and relish his power and influence in American journalism. Yet I construe him as an unrelenting ideological opponent of Islam and a shameless spokesperson for the State of Israel. The need for ethnic diversity in America’s newsrooms and prestigious news-talk shows is necessary to balance news coverage and create an atmosphere so that eventually this violent nation can adopt a more irenic and nuanced approach to international peace and security. The press has power: the people need fair and balanced reporting not agitprop from NBC’s Sunday Meet the Press.