On Thursday, November 21, 2013, theÂ Senate voted 52-48 to eliminate use of the filibusterÂ for federal judicial nominees (not including the Supreme Court) that serve on the US District and US Court of Appeals. The current balance across the federal court system is about 390 appointed by Democratic presidents and 390 appointed by Republican presidents. About ninety-three await confirmation including three on the mini-supremes, (the United States Court of Appeals for the District of Columbia Circuit). 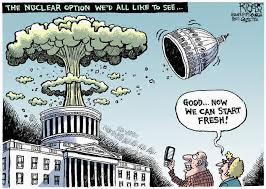 Three post-secondary institutions, Duquesne University, Saint Xavier University and Manhattan College have refused to allow their part-time faculty to organise for purposes of forming a union and engage in collective bargaining. Cynically hiding behind the smokescreen of religiosity and the First Amendment mandate ofÂ separation of church and state, all three have argued that the National Labor Relations Act of 1935 does not apply to them. They have asserted with highly suspect case law that the National Labor Relations Board, its implementing arm, cannot assert jurisdiction from monitoring elections to safeguarding faculty from unfair labour practices and the like. These universities claim asÂ they take Pell Grants, work study and other federal handouts, that the N.L.R.B. is a draconian, intrusive monster ordering innocent faith-based institutions to prove how religious they are prior to receiving an exemption from jurisdictional scrutiny. I guess the N.L.R.B. could just take their word for it! Yet this obstruction of the right to organise is about money, academic freedom, shared governance and not theology!

SXU, a Roman Catholic institution, appealed the Chicago N.L.R.B. ruling affirming the right of the adjuncts to organise and engage in collective bargaining. It is now waiting to be adjudicated, for almost three years, in the Washington national office of the N.L.R.B. Were the university, along with Duquesne and Manhattan College, to lose once again, they could in the spirit of decency and ethics–qualities in very short supply these days in the corporatised academy– allow sealed union-organising votes to be counted or allow elections to proceed. Or if they wanted to spend even more money on overpriced attorneys who are enemies of the faculty, instead of supporting faculty remuneration, they can appeal the N.L.R.B. decision to the D.C. Circuit, which has been quite conservative, anti-labour and frankly a disgrace in its lack of empathy and obscene legislating from the bench. Note Chief Justice John Roberts Jr., Associate Justice Clarence “I hate affirmative action except for me” Thomas, and Â Associate Justice “I will not attend Obama’s State of the Union Address” Samuel Alito were on the D.C. Circuit prior to their elevation to the nine-person, tenured member Supreme Court. A court by the way that stole, coup style judicial review in Marbury v Madison.Â However, with the nuclear option, President Barack Hussein Obama will be able to finally receive a vote for his three appointees to the court and avoid the reactionary, perhaps racial inspired filibustering of the Republican Senate minority.

As a result of a probable tilting of the D.C. Circuit to a more progressive, pro-American worker direction, the likelihood of a successful appeal, if undertaken, before the D.C. Circuit appears now to be vastly diminished.Â It is my opinion that the prospects of part-time faculty at these three institutions receiving a positive outcome concerning the right to organise under the National Labor Relations Act of 1935 is significantly enhanced.

In addition, the Senate allowed Mr Obama to complete the staffing of the N.L.R.B. in Washington, D.C. The Republicans had blocked those appointments as well and with the nuclear option then threatened–changing the rules to allow an up or down vote and not a filibuster–the Republicans backed off and allowed the Obama appointments to proceed.

Therefore, hidden in the Democratic Senate’s caucus changing the rules to allow the election of 2012 to finally apply to advise and consent of most federal judgeships by the Senate,Â is a clear pathway for the adjuncts to gain recognition of their right to organise and a potential evisceration of the argument that faith-based institutions deserve a religious exemption in church-state matters such as the application of federal labour law to their personnel.