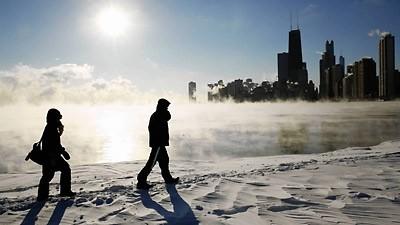 I ran today despite the repeated warnings of frostbite and instant morbidity if one ventures outside the cocoon of domicile heat and flatscreendom.

Running in extreme cold is very good training particularly when mixed with twelve inches of snow. There is very little traffic so if one runs in the streets, the dodging of traffic is minimised. Also while not entirely related to the temperature, the snow and ice strengthens one’s ankles and legs as one has to trudge and extract one’s feet from the elements as each step becomes a challenge. Yet the streets are kinda plowed and one can find a tire-track to run on without much traffic to dodge. You own the streets as others stay immobilised in their dwellings listening to doomsday weather reports!

This is what I wore which actually was too much as I was experiencing some hyperthermia and had to shed some clothing. Tomorrow will be up to about -9 so I will definitely be prepared for hyperthermia!

For my upper torso I had five layers of clothing. I had a T-shirt. Over that a running cotton shirt from a recent 5k. Then I had a sweatshirt over that from a Hot Chocolate, BUMMER ORGANISED chaotic race. Then I had a hoodie with my graduate school, Saint Louis University, emblazoned on the blue and white colour scheme. Then I had an arctic Eddie Bauer coat that weighed quite a bit.

For my head, I had three coverings: I had an old helmet liner from the Army reserves–peace not war–then the SLU hoodie and the Eddie Bauer head cover as well.

For my legs, I wore thin Nike synthetic pants, then a flannel jogging outfit that my mother bought me years ago. So two pairs of pants as it were.

For my feet, two pairs of socks. I wore running socks that barely cover the feet that runners use. I prefer regular ones, and wore a pair of sweat-socks over the running socks.

For my hands, I wore initially two pairs of gloves but only need the arctic, ski ones again made by Eddie Bauer. I have had these forever and they are great. If the fingers get cold you can them move them out of the finger slots into the palm area and you will warm them up.Â After the first couple of miles, I began to feel excessive heat. I had to take off one of the pairs of gloves and move my fingers back into the finger slots because they were too warm in the palm.

Then I unzipped the Eddie Bauer red-arctic coat and removed the hood from my head. So I think if someone follows my dress preparation for the big freeze, they can run in extreme subzero temperature safely and very warmly. Yes I ran four miles. We shall see how tomorrow’s six miles works out. But if you run marathons and half-marathons, you can’t stay put in the winter. You have to run or you will lose all the conditioning and all the prep for the races. Yet one needs to be sensible and not run if one is not in shape to do it but I think since I am just an average runner, that my regimen should work for those who look outside the window but are afraid to venture for their daily run and constitution.