An Interview with George W. Bush 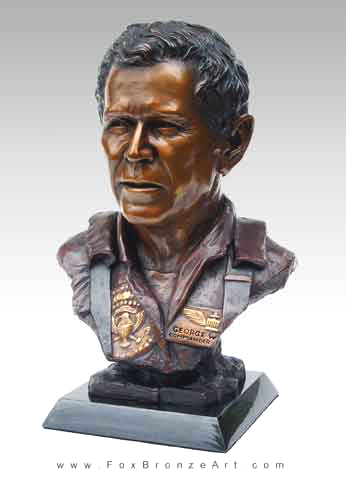 At the Executive Office Building in Washington, D.C.

PNK: Thank you sir for meeting with me here. Allow me to begin in a provocative manner. Mr Bush are you a war criminal?

GWB: This is irresponsible. I am attempting to defend the free world from Islamic fundamentalism and will until I leave office on January 20, 2009. How can you, a professor, ask such an egregious question?

PNK: Mr Bush do you endorse the use of torture and a never ending war in Iraq?

GWB: You are a disgrace. I agreed to give you an interview in an effort to reach out to the academic community and you come up with these questions. The U.S. does not torture. The U.S. is in accord with international law. We understand our obligations under the Geneva Conventions. We are the model and leader of the free world. The surge in Iraq was successful and the country is stable and in good order. Casualties are down substantially and I am not leaving my successor a major shooting war in Iraq.

PNK: Did you not resist the McCain Amendment to prohibit, “cruel, inhuman and degrading treatment” of POW. You voted for him by absentee ballot so I assume you support most of his views. He does yours; at least he did before his polling data began to plummet. Also you are leaving your successor 160,000 troops in Iraq, a government that is a puppet in terms of its survival dependency on U.S. forces, a lack of consensus on the use of oil revenues, power sharing and even a status of forces agreement.

GWB: Hold on fella. We were concerned that C.I.A. operatives who were trying to prevent perhaps an immiment attack, be allowed appropriate means of inducing information. No one tortures for the U.S. and if they do, they are prosecuted. Also counterinsurgency is not microwave; it takes awhile and nervous nellies like you are always eager to disengage even when vital interests are at stake.

PNK: Some believe that the claims that President Hussein…

PNK: We use the title of president and senator and governor for those who previously served in that capacity, but to please you sir, “former” President Saddam Hussein you charged had weapons of mass destruction. He did not. Do you feel any remorse in starting a war on an assumption that proved to be false?

GWB: Professor, as you know, presidents do not independently verify intelligence. We received intelligence that we operated on and it was wrong. Pure and simple.

PNK: But 4,187 Americans have been killed; 125,000-250,000 Iraqis have died for a war that was fought for the wrong reasons. Are you not a war criminal or if you prefer an incompetent leader who went to war against the wishes of the international community for reasons that proved to be utterly false? Should you not be arrested or at least removed from office for such a monumental blunder if not intentional effort at deception?

GWB: Let me tell you something Professor Kirstein and all your leftist friends. We overthrew a dictator. We regime changed an animal. We know and have no doubt that Saddam was sympathetic to Al Qaeda, had contacts with Al Qaeda, and was a growing and gathering threat.

GWB: Let me finish! I am the president of the United States and had we not replaced the Baathist government, he would have been a supporter and an enabler of more Al Qaeda operations. 3000 people died on Sept. 11! Maybe you don’t care but I do sir.

PNK: Both the 911 Commission and every independent analysis has concluded that President Hussein, ok, “former” President Saddam Hussein was not involved in the 911 attacks; was not a meaningful or significant ally of Al Qaeda and that claims that Saddam was supporting terrorism, as you call it, were false.

GWB: I know who you are. You were suspended for condemning the military for using “baby killing tactics of collateral damage.” You were reprimanded for denouncing our military–our men and women who fight so you can be free. Free from censorship, free to say whatever you wish! I like the way you say, “as you call it,” when referring to terrorism. I understand people like you are not overly concerned about protecting America from terrorists. I am not questioning your loyalty but you insult me with your casual use of the term.

PNK: Mr Bush, the term “terrorism” some believe sir is used as a means to dehumanise the “enemy” and as a gratuitous effort to deny the legitimacy of any group that opposes US or Israeli foreign policy. Hamas and Islamic Jihad are labeled “terrorist” and Israeli policies of assassinations, settlement expansions in the West Bank, Golan, wanton destruction of housing, concentration-camp barrier construction, refusal to recognise the Palestinian right to a homeland is never condemned. Iran’s nuclear programme is construed as unacceptable and Israeli’s status as a nuclear weapons state is ignored by my country. Some believe that your use of military force is terrorism. Your destruction of Falluja was terrorism. The sanctions against Iraq were terrorism. The use of white phosphorous weapons are terrorism. The bombing of civilian population centers is terrorism. Abu Ghraib was terrorism. Bagram torture in Afghanistan was terrorism. Shock and awe was terrorism. GuantÃ¡namo crimes in that gulag are terrorism.

GWB: Are you here to get an interview or a supporter of Barack Obama? I wonder sir if your students are subjected to this reasoning? I wonder if you are even capable of discerning between rhetoric and reality? We are in a war against savage Islamic Jihadists and on my watch we will do everything we can to kill and capture them.

PNK: “Kill and capture them.” Shouldn’t presidents be a better role model? Killing people is wrong isn’t it? Could you imagine Dr King speaking like this–advocating the killing of humans? Don’t you think of the children who listen to this and grow up to be the next carriers of ethnocentrism and violent nationalism? Can’t we move from war to peace? Can we tone down the rhetoric of empire and live creatively with each other? “Kill and capture.” I am not pleased at this level of discourse.

GWB: Professor Kirstein, I have one more thing to say. It was people like you that caused our defeat in Vietnam. People like you who undermined the president’s capacity to wage war against the communists in North Vietnam. Again, you are entitled to your opinion but the left in this country is soft on security, unwilling to recognise the realities of international power and I believe are not helpful to the United States. I am responsible for defending this country and will do everything in my power to do so for the next three months of my term.

PNK: During Vietnam, many allege you shirked your duties when in the Air National Guard and kinda dropped out of sight if not worse. You may wish to compare your military record with mine Mr Bush. But I assume when you say “everything in my power,” that includes illegal spying on Americans by the N.S.A. (Ed: National Security Agency) without a court warrant as required under F.I.S.A. (Ed: Foreign Intelligence Surveillance Act) and holding American citizens incommunicado without counsel or a writ of habeas corpus. I thank you for your time Mr Bush. I wish you peace.

GWB: I wish we had less professors like you giving aid and comfort to the enemy. It would make my job a lot easier. Good day and I hope your students learn a lot in your classes!!

PNK: Oh they do sir. They are free because I am free and I declare that and dare anyone ever again to violate my rights. Thanks again Mr Bush.

[This was a notional interview.]