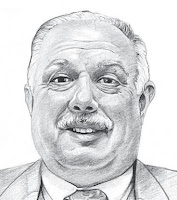 Dr Lawrence P. Frank, provostÂ  and vice president for academic affairs at N.E.I.U., was dean of the School of Arts and SciencesÂ at St Xavier University where I teach. He left for the provost job at N.E.I.U. in Fall 2002.Â In Spring semester of 1996 during a job-search departmental vote,Â Dr FrankÂ repeatedly raised the issue of age regarding a woman who had been brought to campus. Frankly I don’t think school deans should be voting within departments on a job search. He was tenured in the departmentÂ at the rank of professor but was not a department faculty member because he was reassigned to other duties. This person basically got TWO votes: one as a faux faculty member andÂ the other asÂ dean. Just arrogant and outrageous!!!Â

Dr Frank insisted there were not enough young people in Arts and Sciences and was emphatic in wanting to hireÂ a younger candidate than the woman. I aggressively addressed questions about the propriety, if not legality,Â of discussing this aspect of a candidate’s profile. He shrieked at me with vehemence andÂ rage that I would make the charge of ageism.Â But that is what it was, pure and simple! I have never forgotten this incident and to this day churn at the thought of being rebuked in such an abusive and disrespectufulÂ manner in front of my department colleagues, for daring to make an ethical and warranted challenge to an out-of-control, ageistÂ administrator. I can assure you if I ever again encounter such administrative misconduct andÂ egregious violations of civil rights law, I will use all appropriate means to engage such excess. I think Dr Frank should have beenÂ reprimanded and fired from St Xavier for this single incident of palpable and irrefutable age discrimination in employment practices.

The following was sent to me by the distingusihed University of Texas Professor Dana Cloud.

Dear Supporters and Signers (and potential signers and supporters) of Justice for Loretta Capeheart petition. The petition is at
http://www.petitiononline.com/j4lc/petition.html.

I am attaching background information on this case for those unfamiliar with it.

Thank you all for your support and your continued commitment to free speech and academic freedom. As of today, we have 700 signatures, including those of prominent scholars Noam Chomsky and Howard Zinn. Please join them, if you have not, in signing the petition to support Loretta. Also, please forward this call far and wide as you see fit.

There is an emerging front in the struggle for academic freedom. Some university leaders are attacking outspoken faculty on the grounds that university employees have no free speech rights when it comes to criticizing their own institutions. This attack epitomizes NortheasternÂ  Illinois UniversityÂ¹s harassment of justice studies professor Loretta Capeheart, who has been targeted by her administration for her outspokenness for workersÂ¹ rights in a 2004 faculty strike, against the Iraq war, in defense of student protesters, and for increased representation of minority scholars at NEIU. In retaliation, she was denied merited awards and an appointment to chair of her departmentâ€¹a position to which she was elected. NEIU Vice President Melvin Terrell publicly defamed Capeheart, accusing her withoutÂ  grounds of stalking a student.

Capeheart is suing Terrell for defamation, alongside NEIUÂ¹s President and Provost {Lawrence P. Frank} for retaliation and violation of her constitutional right to free speech. Incredibly, the administratorsÂ¹ response argues that Capeheart, as a state employee, may not sue the University or its officials, contravene their positions, question their conduct, or speak as a faculty member on matters of public concern. Their motion to dismiss the case states that clothed in her authority as a faculty member,Â² Capeheart criticized University policy, Â³even going so far as to disagree with the stated positions of the Provost.Â² Â³It is very middle ages,Â² Capehart said, Â³like the lord vs. the serf.Â²

Unfortunately, the administration has frightening legal precedent, according to the AAUP.Â  The Supreme CourtÂ¹s 2006 decision in Garcetti v. Ceballos held that state employees are not afforded first amendment protection if they are speaking on subjects relevant to their professional duties; When UC Irvine professor Juan Hong angered University administrators by opposing the replacement of tenure-track faculty by term lecturers, he was denied a merit salary increase. The Court ruled against Hong, citing Garcetti.

However, there is some good news to report on Loretta’s case! Â On March 2, 2009, Judge Blanche Manning, U.S. District Court Judge, Northern Illinois District agreed to hear LorettaÂ¹s case despite the universityÂ¹s arguments that it was Â³futileÂ² for her to claim any right to free speech. Please see the judgeÂ¹s comments below.

There is still much to do to guarantee justice for Loretta and to defend our rights to free speech and academic freedom. Â We are asking that youÂ  continue to forward the link to the petition to others concerned with academic freedom and urge them to sign on to the petition. Â A press conference will be called for the petition delivery to NEIU President Sharon Hahs in April. An announcement will be forthcoming.

Please sign at http://www.petitiononline.com/j4lc/petition.html , and
encourage others to do so.

Thanks again for your support.

“The defendants oppose the amendment on the basis that it would be futile. Specifically, they contend that the First Amendment protects only speech by public employees that addresses matters of public concern as opposed to matters involving their official duties. See Garcetti v. Ceballos, 547 U.S. 410, 417 (2006) (Â³when public employees make statements pursuant to their official duties, the employees are not speaking as citizens for First Amendment purposes, and the Constitution does not insulate their communications from employer discipline.Â²) The defendants contend that the speech at issue was not protected by the First Amendment because (i) it addressed university policy, (ii) occurred at university-sponsored events which Capeheart attended as a university employee, and (iii) concerned her official duties. However, as Capeheart argues, the speech also addressed matters of public concern such as discrimination and the ability of students to express anti-war views. At this juncture, without the benefit of a full record including details of CapeheartÂ¹s speech and the nature of the events she attended, it would be premature to determine whether her speech was protected by the First Amendment. Accordingly, futility is not a basis for denying CapeheartÂ¹s motion for leave to amend.” Judge Manning, 3-2-09