We Need Men (Womyn) of Peace, Not Hate and War: Defeat Senator Lieberman

On Tuesday, vote for Ned Lamont if you live in Connecticut. It appears he is leading with a considerable margin. Senator Joseph I. Lieberman is a centrist Democrat, an insider loved by the powerful ruling elites, but the party needs to move to the far left to end war, blind support of self-destructive and terrorist Israel, to establish national health insurance for ALL Americans, to end drilling for oil in and around ALL coastal waters, the abolition of the death penalty, the refusal to confirm racist, reactionary, cruel justices to the Supreme Court and judges to the federal bench.

I do not know if Mr Lamont subscribes to all of these public policy issues but he is opposed to the Bush-Clinton-Kerry War that they so fervently advocated and supported. Senator Lieberman has refused to alter his stance on the war in the face of possible primary-election defeat. Yes a woman of principle does not abandon her values in the face of political machinations, yet the Senator's utter inflexibility on the use of bombs, torture and artillery to advance the interests of a Zionist entity and a ruthless America without sensitivity to the sufferings of others is a fanaticism that hopefully will cause his political demise. 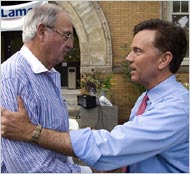 This entry was posted in Iraq, Af-Pak War, Politics/Music/Culture. Bookmark the permalink.