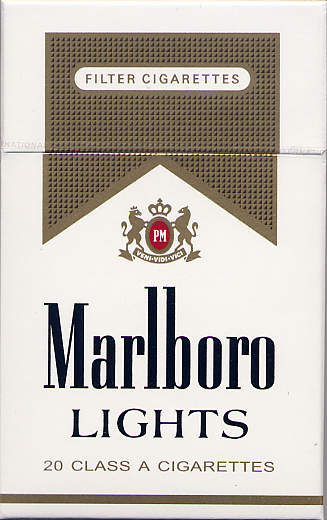 The government has ordered the word “light” or its plural form “lights” be removed from cigarette packaging andÂ advertisementÂ so it would not convey the message that the products are less toxic than non-light cigarettes. Many premium brands areÂ changing their names.Â So much for First Amendment free speech rights whichÂ I think should generally approach absolutismÂ unless a clear and present danger to the public safety exists.Â Perhaps the word “Light” reaches that level of danger butÂ I doubt it. Yet cigarettes kill. Â Lightness in the head may induce the utilisation of these products but those who buy Marlboro Lights will soon be smoking, “Marlboro Gold Pack.” Old garbage in new bags I reckon.

Given the increase in state and federal taxation on tobacco products, they are rapidly becoming worth their weight in gold. So the new appellation of “gold” may indeed be an economic reminder of the cost accrued to use these products. I am opposed to further regressive taxation on tobacco. I am opposed to criminalisation or prohibition of tobacco. I am a former smoker and find them repugnant yet IÂ would prefer that education and not excessive taxation be deployed as the primary weapon to suppress consumption.

Tobacco is well-known as a lethal product with adverse health consequences.Â You lose 10 years by smoking long term.Â I mean the first Surgeon General’s report on smoking-related illnesses was in 1964. {The year of the epic Ken Boyer, Cardinal’s third baseperson, grand slam home run in the fourth game of the World Series in Yankee Stadium.} I am waiting for Altria et al to make a safe cigarette that tastes good but I am afraid that will not be possible. So snuff out the carcinogens but avoid persecution and bullying law suits against companies who produce a legal product whose health risks are hardly concealed from the public.