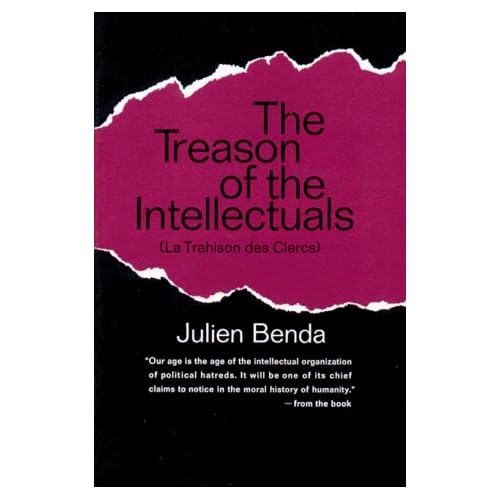 A little “treason” from intellectuals (‘La trahison des clercs’ ) can go along way toward justice, responsibility and challenging mass murder and state terrorism.

As the A.H.A. gears up for this significant historic vote on the resolution on the Iraq War–see below post–they have established a blog where historians can debate the merits of the A.H.A. taking a position on the war. Here are two of my comments. I would have submitted one but I could not locate it and thought it may have been rejected by the blog’s monitors. It was NOT and they were kind enough to print both of them. I will then follow my comments with two posts that take an opposite position on whether it is appropriate for the A.H.A. to oppose the war or even to engage in any form of public advocacy.

‘La trahison des clercs’ is Silence Not Dissent
The A.H.A. has an obligation to engage in social and political activism. Historians are usually evaluated on their research, teaching and service. The latter indeed does and should include public advocacy, extramural utterances and progressive engagement with the world outside the university. Indeed it is our responsibility as an organization to advance the public interest. We cannot allow the radical right to dictate what the role of the intellectual is in the United States. David Horowitz, in writing and in a public debate with me last march on the war and academic freedom, has described Historians Against the War as an unprofessional organization. His point was that historians and other scholars should not use their professional organizations to advance a social or political agenda. Why not? Is not war worthy of the attention of the American people either individually or collectively through groups? Is not the fate of the earth and the enormous destabilising impact of the United States on international peace of such importance that our scope of engagement cannot be confined to “academic” and curricular needs? It is our duty and a measure of our honour as historians and as Americans, or whatever one’s national origins, to oppose this war and the suffering it has perpetrated for such ignoble ends. Silence will be interpreted as deference and an abdication of our social responsibility.

Resist American Imperialism
As historians and as citizens, we have a moral obligation to oppose unjust war. Our country apparently has no vision and no plan to demilitarise the nation and to move toward a more irenic and less fractured world. Where is the vision and the effort to move beyond war and the identification of national pride with military prowess and the maximizing of power? It is our patriotic duty as Americans to lend our efforts to stop this madness, to reverse this plunge into the darkness, to demand peace, to seek a redirection of our nation from empire to modesty and international comity. David Horowitz may have included me in his 101 most dangerous academics. I may have been suspended four years ago for an antiwar e-mail to the Air Force Academy but I will never be silenced or coerced into numbing moderation as the bombs drop, the babies burn and our world becomes increasingly dangerous due to American external relations. The A.H.A. is not ONLY for historians; we have a responsibility as Americans, or whatever one’s nationality is, to serve the common interest and to effectuate progressive social change that enhances global stability. Opposing war is an example of that commitment and our duty and our honour is enhanced in opposing war and demanding peace and conflict resolution through diplomacy.

Not appropriate for the AHA
Organized opposition to the war by historians is appropriate, but the AHA should not be the vehicle for this opposition. Professional organizations have a limited amount of political capital, and should not spend it on matters outside the practice of their profession. Nor should the AHA alienate members who might support the war yet be opposed to (say) reclassification of documents. The bullet points about declassification and US visits by foreign scholars are appropriate subjects for the AHA to comment on. They are not inextricably linked to the war. It is surprising that historians fall for the logical fallacy that separate, yet contemporaneous, actions taken by a collective (the U.S. government) are yoked together. Even if it were appropriate for the AHA to comment on the war, this resolution’s confused conflation of separate topics would speak poorly of historian’s claims to special insight into the present by virtue of our historical study.

Dear Members,
As a veteran, a historian who utilizes restricted documents, a graduate student of security studies, and a NEW member of the AHA, I respectfully suggest we refrain from making contemporary political policy declarations as an organization. I did not seek to join a political group when I joined the AHA. Politics is inherently divisive. Why invite such division into our noble profession? We should aggressively debate history and not the present. Please, stand by your convictions and be a passionate advocate of whatever current policy you desire on a personal-political level not a professional level. Other coalitions are better suited for debating and shaping current interrogation techniques; if that is of interest to you, seek one out. Or, write a monograph about the subject and let voters and elected representatives decide what is best as political beings. Classified information is dangerous when in the wrong hands and should be safe guarded. President Lincoln suspended the writ of habeas corpus in certain cases. Imagine if AHA had officially condemned him at that time. Our organizational legacy would certainly impact the writings and impressions of him today. This resolution, if ratified, will impact future historians ability to adjudicate and debate today’s events 150 years from now. Let us vote not to corrupt our future with the ratification of this resolution, but set the standard for a professional organization that understands its role and limits.

This entry was posted in Academia/Academic Freedom, Iraq, Af-Pak War. Bookmark the permalink.