Let us remember what we are dealing with. A terrorist democracy. The United States construes itself as the leader of counterproliferation of nuclear weapons. It is without question the primary nuclear threat to international peace and security.

The inevitable if the U.S. and other nations do not act responsibly in the nuclear age.

The United States is trying to divide Europe, with its latest Star Wars proposal, into a new Cold War although I do not believe it is actually attempting to engage a European power in a direct military confrontation. Aimed at the Russian Federation, the U.S. is trying to pressure Poland and the Czech Republic to “host” respectively a missile battery and a radar-tracking system to interdict allegedly Iranian ballistic missiles. The Islamic Republic of Iran would NEVER attack a European state unless its existence were threatened, and does not even remotely possess the strategic capacity to target C.O.N.U.S. (the U.S. homeland). President Jacques Chirac of France, who so nobly opposed the Iraq War crime and whose brilliant twelve-year tenure as president will end in some six weeks, has expressed deep dissatisfaction with U.S. efforts to establish its latest anti-ballistic missile system closer to the Russian Federation.

Europeans are simply sick of this nonsense. This never ending American emphasis on war, nuclear supremacy and alliance mentality. “In Poland, an opinion poll by CBOS showed 56 percent of Poles oppose government plans to host the anti-missile shield. Opinion polls in the Czech Republic, which has also been asked to host parts of the shield, have shown similar results.”

The United States simply abrogated the Anti-Ballistic Missile Treaty with Russia: an example of reckless disregard for the carefully constructed, although hardly utopian, efforts to constrain the U.S. and the former Union of Sovet Socialist Republics from launching a first-strike disarming attack. Now it appears, with its obsession for total security in a world that its own adventurist, imperialist policies makes less secure, it is using its abrogation of A.B.M. to actually “contain” the Russians with a new missile defence system. President Putin also is opposed to deploying these radars because he rightly senses that Iran is not the only or even the principal objective but the Russian Federation. He has indicated that Russia would respond to a nuclear shield deployed along its borders or in the former near abroad. 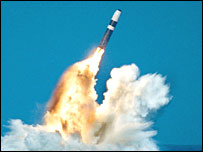 Also please note that the outlaw U.S. is in violation of the N.P.T. (Nuclear Non-Proliferaton Treaty of 1968). Article I prohibits signatories from exchanging and transferrring nuclear systems to a nuclear state which the U.S. does with the United Kingdom with its Trident sea-based nuclear deterrent on some four submarines: courtesy of the United States. Article VI pledges the nuclear club to seek an end to the arms race and move toward nuclear disarmament which the United States so ostentatiously ignores. The U.S. wants to develop–“Reliable Replacement Warheads”–new nuclear reentry vehicles (strategic nuclear weapons) on S.L.B.M.s as the warheads are “retired.”

Who can stop this nation from all these actions and contain its lust for violence and invasion? That is the question that faces the international community.