Kirstein will appear on the Kevin Barrett, Truth Jihad Radio show on the American Freedom Radio network from 2:00-3:00 CST on Friday, March 11, 2011. The program is broadcast from Madison, Wisconsin and will explore the challenges to academic freedom and American Foreign Policy. 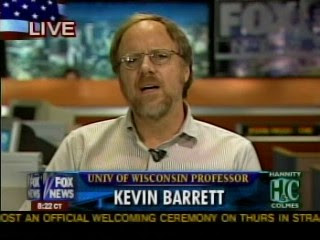 Image of Dr Barrett during his academic freedom controversy at the University of Wisconsin.

Dr Barrett taught at the University of Wisconsin in MadisonÂ as an adjunct when he claimed in 2006 the 9/11 attacks were the product of internal conspiracies and machinations as opposed to Muslim-inspired rage. His teachingÂ  appointment was on a semester to semester basis and after initial institutional statements of academic freedom support, he was not renewed and has claimed he was dismissed for his political views. He should not have been if that were the case. All university and college professors are entitled to academic freedom protection as enunciated in the AAUP 1940 Statement of Principles on Academic Freedom and Tenure. Unfortunately those who have academic freedom seldom exercise it in a provocative manner and those whoÂ do are frequently sanctioned and persecuted for daring to exercise either a First Amendment right of free speech (public universities) or the quasi-constitutional right of academic freedom as it has developed since Sweezy v. New Hampshire and Keyishian v. Board of RegentsÂ over aÂ half-centuryÂ century ago.

Dr Barrett has asked me to contextualise my academic freedom case with attendant suspension and reprimand with the status of academic freedom in the academy. I will address specifically issuesÂ  of academic freedom as it pertains to American external affairs, with particular emphasis on the State of Israel,Â and discrimination based upon race.