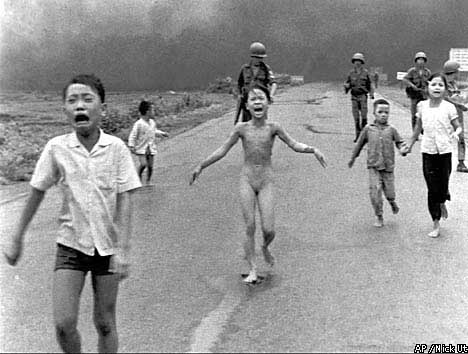 Remember the extermination during the Vietnam genocide when innocent babies and children were napalmed to death by American imperialist forces. I MEMORIALISE them this MEMORIAL Day. Nick Ut won a Pulitzer Prize for this June 1972 photograph of nine-year-old napalm victim, Kim Phuc, et al.

Memorial Day is a perversion and a distortion of reality because it exonerates the evil elites that send our women and men into battle. It focuses on the victims of their actions but does not assess the immorality and cruelty of these American militant-elites in suits and pantsuits. Of course it is appropriate to commemorate military personnel who have died in war, but for this country, Memorial Day has developed in an unseemly and despicable manner. It glorifies war. It should condemn war and commemorate those who died on all sides of a conflict.

We use this day to glorify the act but rarely the tragedy of death in war. Our soldiers, and why marines are not called soldiers is beyond my powers of comprehension, have frequently died in vain; a needless termination of their lives. This is hard for families and others to accept. The notion of dying in battle ideally would represent sacrifice for a noble cause; falling in combat and dying in the mud of a foreign nation should be the ultimate sacrifice for a greater good. But this is America and our soldiers AND marines are exploited in the name of “terrorism,” “jihadism”, “anti-Iranism,” and imperialism. They are not heroes even though many are innocent victims in wars that cowards in Washington have sent them to wage for reasons that reflect on the bestiality and racism of American life.

Memorial Day is also a diversion and a soporific to divert attention from the evil of America. By emphasising the sacrifice of those who died in the name of their country, it reduces the capacity for self-reflection on why America’s fighting women and men had to die in the first place. Memorial Day also is somewhat ethnocentric and xenophobic. Our dead are no more precious than other parent’s children who have died at our hands as well. I will not prioritise our soldiers as more worthy of respect and commemoration than other soldiers and non-combatants that have died from our “superior firepower.” It discourages and even disparages reflections on those millions whom we murder in war: Innocent Japanese in Nagasaki; innocent Pashtuns getting married or shopping in a market in Helmand Province, Afghanistan; 100,000s of Iraqis blown to bits by shock and awe or white phosphorous at Falluja or by baby-killers at Haditha; innocent Vietnamese incinerated from Hanoi to Ho Chi Minh City.

Memoral Day obscures those air force pilots who may have been shot down after dropping ordinance on a village; soldiers might be killed by a roadside bomb after sweeping a village and shooting civilians for sport; soldiers might be tortured having slit the throats of babies or throwing grenades into a hootch or an apartment building; a tank-crew might be killed by an anti-tank missile after it blew up a hotel or home full of non-combatants. Yes American military personnel have died while trying to save the lives of their comrades and perhaps innocents as well. I am not suggesting the total lack of “in situ” heroics in a combat setting.

My father was in combat in the Pacific during World War II in the Aleutian Islands and was an officer (captain) in the army. He was in the medical corps as a physician but was in combat at least once according to V.A. files. He was attached to the 37th infantry at Attu in 1942-1943. He developed a cardiac-related problem while in the service and was on a life-time pension which my mother received after his death. I have a brother-in-law who was in country as a naval officer during the Vietnam War who was also a physician. Of course few American families are not related to some military veteran or active duty person. I was in the U.S. army reserves and was stationed at Fort Leonard Wood, Missouri. I am not proud of that service and thought it was the most miserable, least productive and immoral part of my life.

This entry was posted in External Affairs, Politics/Music/Culture. Bookmark the permalink.