At 5:36 P.M. Mountain Standard Time on July 24, 2007, Mister Ward Churchill was fired from his tenured full professorship at the University of Colorado at Boulder. The Regents of the University of Colorado entertained a motion. It was seconded and voted on. There was one dissenting vote out of nine cast. Only Cindy Carlisle had the honour and decency to resist this persecution. Hopefully that person will be lauded and honoured for courage. The procedure lasted about one minute.

There were boos and other displays of protest from an audience in the auditorium. The regents refused to accept any public comments and the announcement was made. The regents then stood and walked out of the room.

Mr Churchill will now pursue legal action against the university and hopefully will prevail as this rampant new McCarthyism sweeps our land. The mask is off and what we have is an increasingly dictatorial nation with growing numbers of academic administrators and I might add faculty who lack the wisdom and the judgment to protect academic freedom, critical thinking and dissent within the academy. This decision is a setback to higher education and a day that will live in infamy. 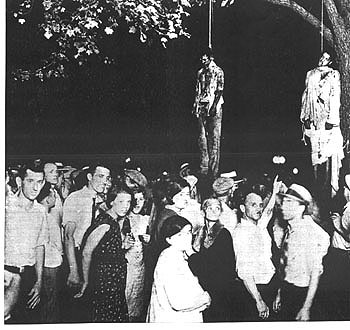 “They’re selling postcards of the hanging.” The state of academia in a nation that kills Arabs and Vietnamese and committed genocide against Native Americans to spread democracy, free speech and American western values.