Most historians in the US now consider President Harry S Truman to have achieved great president iconography. The new “revisionism” is typical of American historiography. Emphasise crisis management, toughness, resolve in sending humans out to kill others from the comfort of the royal oval office. Show resolve and militaristic aggression against the Soviets that led to the half-century criminal Cold War that robbed from the poor and infected global culture. President Truman should have been tried at NÃ¼rnberg along with Germans who were tried and executed. I do not advocate execution but I do advocate that American-presidential historians cease their nationalistic, uncritical hagiorgraphy ofÂ chief executiveÂ performance and reexamine the history of the Truman years that constitute one of the most criminal displays of mass murder and racism in the history of civilisation.

If Standard and Poor’sÂ can downgrade US capacity to pay its bills, fawning Truman court historians like the dishonourable, fake plagiaristÂ Doris Kearns Goodwin and the late RobertÂ DonovanÂ can be challenged by real historians. Mr Truman was one of the worst presidents in American history and only a coterie ofÂ  faux “historians” would assess this thug otherwise. A rare exception is Gar Alperovitz, one of the three or four greatest historians since the war whose Atomic Diplomacy remains one of the great masterpieces of historical literature.

As relayed by Dr Alperovitz, Admiral William D. Leahy, Truman’s chief of staff was unsparing in his critical assessment of American-nuclear genocide:

â€œ[T]he use of this barbarous weapon at Hiroshima and Nagasaki was of no material assistance in our war against Japan. The Japanese were already defeated and ready to surrender. . . . [I]n being the first to use it, we . . . adopted an ethical standard common to the barbarians of the Dark Ages.Â  I was not taught to make war in that fashion, and wars cannot be won by destroying women and children.â€ 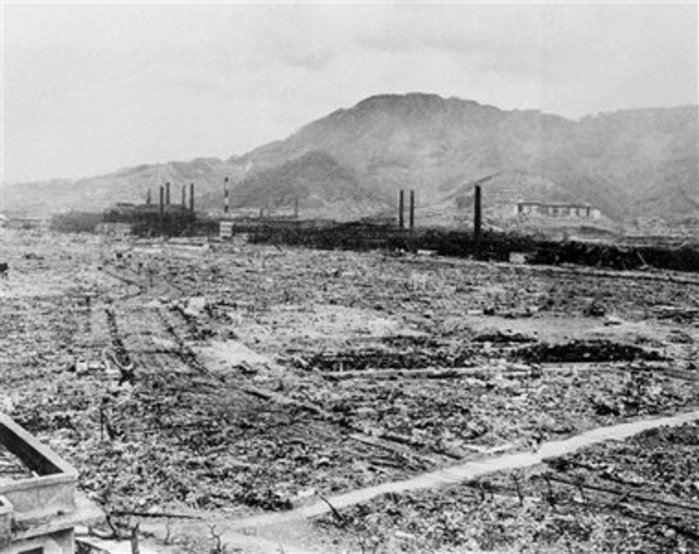 Remember Hiroshima and NagasakiÂ fission-bomb genocide which was the greatest crime ever conducted in warfare with its evilÂ legacy of the nuclear cloud enveloping humankind. The US invented the A-bomb, developed thermonuclear weapons and MIRVs and left the planet with the potential and the likelihood of further nuclear holocausts.

ANNIVERSARYÂ Â Â  Paper lanterns float along the Motoyasu River in front of the illuminated Atomic Bomb Dome near Hiroshima Peace Memorial Park in Hiroshima, western Japan, Saturday, Aug. 6, 2011.Â  The Japanese city of Hiroshima on Saturday marked the 66th anniversary of the bombing, as the nation fights a different kind of disaster from atomic technology – a nuclear plant in a meltdown crisis after being hit by a tsunami.
Koji Sasahara/The Associated Press

HIROSHIMA, JAPAN The Japanese city of Hiroshima on Saturday marked the 66th anniversary of the bombing, as the nation fights a different kind of disaster from atomic technology â€” a nuclear plant in a meltdown crisis after being hit by a tsunami.

The bomb destroyed most of the city and killed as many as 140,000 people. A second atomic bombing Aug. 9 that year in Nagasaki killed tens of thousands more and prompted the Japanese to surrender.

Prime Minister Naoto Kan on Saturday laid a wreath of yellow flowers at Hiroshima Peace Memorial Park and reiterated Japanâ€™s promise to never repeat the horrors of Hiroshima, whose suffering continues today because of illnesses passed down over generations.

Japan has long vowed never to make or possess nuclear weapons, but embraced nuclear power as it aimed to rebuild and modernize after the war.

Crowds of people clutching Buddhist prayer beads bowed their heads Saturday in commemorating the dead as pigeons were released during the solemn gathering repeated every year before the skeletal dome of a bomb-ravaged building.

The prime minister, in his speech, also touched on Japanâ€™s more recent nuclear catastrophe at the northeastern Fukushima Dai-ichi power plant, where a massive tsunami set off by a 9.0 magnitude earthquake on March 11 knocked out backup generators that powered the plantâ€™s cooling mechanisms.

Hiroshima mayor Kazumi Matsui stopped short of calling for a nation without nuclear power while retierating his pledge to work toward a world without atomic weapons.

But he acknowledged that the trust people had in the safety of nuclear power had been damaged.

â€œSome seek to abandon nuclear power altogether with the belief that Mankind cannot co-exist with nuclear energy, while others demand stricter regulation of nuclear power and more renewable energy,â€ he said.