Today in Chicago: Senator Barack Obama on Race and Peace

This afternoon I was at an event in Chicago, at the invitation of a friend, that featured Senator Barack Obama, Democrat of Illinois. The event was held in a residence and lasted from 1200 to 130 CDT. I asked the Senator as he was shaking hands about his controversy with Senator Hillary Rodham Clinton, Democrat of New York, over whether American presidents should talk to heads of state from nations that have diplomatic or other conflicts with the U.S. I told him that Mark Shields on the Newshour With Jim Lehrer said, “You do not have a glass jaw” because you did not retract or waver in your responses. I told him that I was impressed that he did not back down when she said it would be “irresponsible and naive” for an American president to talk to heads of state without preconditions. The Illinois Senator had previously averred it was “naive and irresponsible” for Senator Clinton to vote for an authorisation for war without an exit strategy. I said the prowar Mrs. Clinton’s attacks seemed to resonate from the old Cold War game of trying to paint a candidate as insufficiently willing to defend American interests.

The Senator said: “I am skinny but I am tough.” 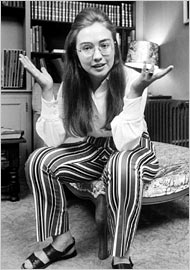 Later he spoke in front of the group of about seventy to eighty people and took three questions. I asked the first question: “How do the American people begin to see that national security and international security are interrelated? These concepts have been bifurcated but they are related. Your main opponent in the Democratic presidential contest (Senator Hillary Clinton) is trying to suggest there is something wrong for an American president to speak to heads of state that we have differences with.”

Without quoting him directly because I did not tape his answer, he addressed my question for about five minutes. These were some of his points.

1) No one can fool him and he would never be outfoxed or propagandised by a foreign leader. He would not just walk into a conversation but would have specific agendas and planning in advance.

2) Americans are looking for change. The Iraq War has caused over 3600 American deaths and Americans are looking for a different approach to external affairs. He indicated that the role of the president is also to repair America’s image abroad. He was concerned by the global perception that the U.S. is too arrogant and too willing to resolve differences through force. He said American presidents have a habit of only wanting to talk to heads of state with whom they already agree. He said almost verbatim, “In the past, we wanted heads of state to agree to everything before we would talk to them and that is wrong.” He said yes the American people want to know that their president would use military force as needed to protect them. That an American president would be willing “to blow up people.” He indicated that an American withdrawal from Iraq must be well-planned and disciplined unlike the invasion that was not. He did not get into specifics on timetables but it was clear he was eager to end the conflict.

He said he has spoken recently to Richard Clarke, the noted expert on terrorism. Senator Obama said Mr Clarke told him there were thousands of young people willing to commit suicide attacks, (I think he said 20,000) but that there are a billion other Muslims whom we need to interact with and improve our image with. He said many European nations as well, such as France, have also expressed concern about American unilateralism in the world.

3) He was asked by an African-American woman whether whites would vote for him and whether his standing in the polls is inflated due to white voters not wanting to reveal their true preferences for a non-white candidate. He indicated there was a time when polling data such as Governor Douglas Wilder (lost a Senate bid in 1994) in Virginia and former Mayor David Dinkins (lost to Rudy Giuliani for mayoral reelection) in New York did exaggerate white support for an African-American seeking high office. He said, however, in the case of Harold Ford in Tennessee, who almost won a Senate seat, that polling data underestimated his strength among whites and that he lost by “a point.” Mr Obama said that, “yes there are some whites who would not support my candidacy because of race, but they probably would disagree with my philosophy and not vote for me anyway.” He indicated that he had faith in America and that he was being judged for his qualifications and that Americans are a decent, fair people.

Senator Obama wore a white shirt with an open collar, sleeves rolled up and dark slacks. Many of the male guests wore suits and ties and he urged them to take off their jackets due to the hot summer day in Chicago. The presidential candidate had a cell-phone attached to his belt. It did not ring during the event. He is quite thin but looks well rested for a presidential candidate who is in pursuit of a rendezvous with destiny.