In this improbable dream, the beloved, adored and historically glorious St. Louis Cardinals won the World Series. They did not do it with swagger. They did not do it with high-fives and gloating when a fellow athlete sustained a concussion as in football. They did not do with it violence or the display of Narcissistic bodies or excessive tattoos, although I respect personal preferences. Baseball uniforms cover; they don’t display. There is a modesty to the game and a challenge to the marketing mantra that violence is the key to turnstile frenzy. They did not prevail with illegal drugs or performance enhancing injections such as their disgraceful hitting coach, Mark McGuire, used to hit home runs against non-suspecting pitchers. They did it by defeating the Houston Astros in their improbable quest while 10 1/2 games back on August 25, 2011 to end the regular season and in the playoffs by dispatching the Philadelphia Phillies, the Milwaukee Brewers and the Texas (Death Penalty Slaughter, Bush) Rangers. 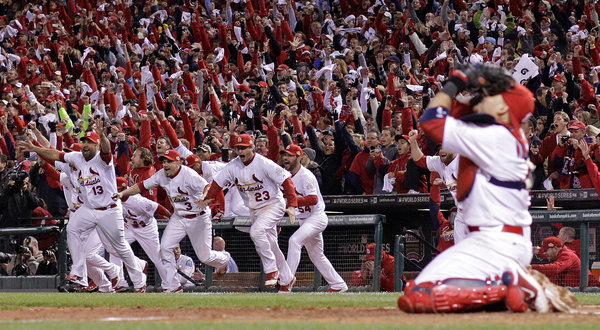 St. Louis is baseball as the city has for generations identified itself with beer and baseball. Most of their eleven World Series wins came with great teams. This was an average team, with great competitive skill and determination that may not win half their games during the 2012 season. Recall the 1964 epic run to glory when the team was 6 1/2 games back to the Phillies with two weeks left in the season. The 2006 team was also a wild-card team that was not expected to win. We tend to forget that incredible run just five years ago. It is remarkable that Tony La Russa was able to take his last two World Series editions to victory in this manner. It is stunning.

I would like to see greater ethnic diversity on the St Louis Cardinals baseball team. While it has several Latino playersÂ  with one Albert Pujols destined for Cooperstown, there are very few African American. Let’s remember Branch Rickey who integrated baseball by bringing the storied Jackie Robinson from the Negro League’s Kansas City Monarchs to the Brooklyn Dodgers in 1947. So many Cardinals are in the Hall of Fame and many are African-American. While I counted two pitchers, a starter and a reliever, I don’t believe there is an everyday starting position player who is African-American. There were none who took the field as the seventh game of the World Series unfolded in St. Louis on October 28, 2011. None.

I grew up a Cardinal fan. I have pictures of me as a young child sitting in my backyard in University City with my mother wearing a St Louis Cardinal tee-shirt. My mother wrote on the back of each picture a summary of my facial expressions–an act of love. I recently and I teach in Chicago wore the away hat with the precious red dot on top and a Cardinal jacket to my classes. I also yesterday pinned two old Cardinal pennants under hooks that hold maps on the whiteboard in front of my classes. One student said, “We don’t like them up here.” Another said, “I won’t talk to you; I am a Cub fan.” I said we are not playing the Cubs but the Texas (Death Penalty Slaughter, Bush) Rangers.

I love the Cardinals and my dad would hang his Zenith portable radio on the apple tree listening to Harry Caray, now purged from Cardinal memory due to a dalliance with “Mrs. August A. Bush,” when the beer baron was hospitalised. Yet Mr Caray was the greatest Cardinal baseball announcer in their illustrious and magnificent history. Harry Caray created the Cardinals broadcasting culture, not Jack Buck or Mike Shannon. It was Mr Caray who one could initially listen to on KMOX in the middle of a game and know whether the Cardinals were winning or losing. His tone of voice and emotions revealed the current state of a game; “Oh, he popped it up.” “He looked sick on that pitch.”

Remember the World Series this year as an exemplar of class and determination as St Louis enjoys another championship with a team whose and organisational skill that will endure for the ages!