Senator Joseph Lieberman, (I) from ConnecticutÂ is leaving the Senate and a legacy of racism, militarism and monstrous evil. This man derailed the possibility of extending Medicare to those fifty-fiveÂ or olderÂ and establishing a nation-wide “public option” of Obamacare. This person sidetracked socialised medicine with a single payer due to his fealty to Connecticut insurance companies. Mr Lieberman was aware that insurance companies would be an endangered species if their egregious for-profit health care scam was replaced by a truly democratic, socialist system of universal health care as articulated in Michael Moore’s epicÂ  2007 film Sicko.Â This arrogant, disgraceful figure with the forever monotone, nasalÂ voice, could not be swayed from such an allegiance to big business at the expense of fifty million people without health insurance. 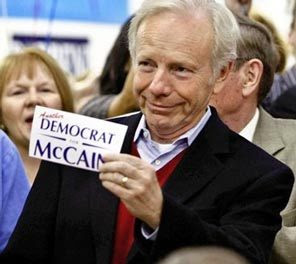 I am not critical of his abandoning the Democratic Party in 2008 in his supportÂ ofÂ baby-killer (in all likelihood) war criminal Vietnam air-force bomberÂ John McCain, but his racist attitudes toward Muslims and Palestinians. Mr Lieberman did not question the crimes against the Palestinians committed by Israel. Advocating a muscular foreign policy, he was quick to label national-liberation movements inÂ southern Lebanon, Gaza and the West Bank as terrorist while never questioning the apartheid regime in Tel Aviv. Not once in his harangues against Iran’s nuclear ambitions, did this partisan ever raise the significance or even the existence of Israel’s nuclear “deterrent” force. He never condemned the Gaza invasion of 2008-2009. He never advocated peace talks between Israel and Hamas. He never attempted to understand the Arab street and why it is hostile to American-Israeli interests. Maybe sixty-five years of apartheid and colonialism might create less than compliant acolytes of the hyperpower’sÂ uncritical support of Israel.

Mr Lieberman and Senators John McCain and Lindsey Graham were famous for their world-wide travels at taxpayer’s expense as they would fly around from one “war zone” to the next, always guarded, always comfortable, always ambitious to extend the empire’s war-making machine to the next brown-skinned resistant nation wanting to be free. While some gushed over the putativeÂ bipartisanship, it wasÂ more accurately a reflection of the generally homogeneous foreign policy of the Republican and Democratic parties. Note the final Obama-Romney “debate.” It was hard to discern who was defending Obama’s foreign policy the most: the president or the erstwhileÂ governor.

I doubt if Senator Lieberman’s departure will have a more irenic impact on American imperialism. There are so many other racist, militant defence hawks who will carry the baton. At least we won’t hear this particular version of venality and insensitivity to the plight ofÂ Americans who are dying for lack of health insurance, and his transparent,Â religiously motivated support of Israel’s brutal suppression and persecution of Arabs throughout Palestine and the Levant.

While I deplore the Bush v.Gore decision of 2000 in which five conservatives handed the Florida electoral votes to Governor Bush, I am pleased that Joe Lieberman never became vice president of the United States. As bad as DickÂ Cheney was, the thought of a possibleÂ President Lieberman is one that should cause all Americans to be thankful that the Supreme Court foreclosed that possibility at least from 2001 to 2005.