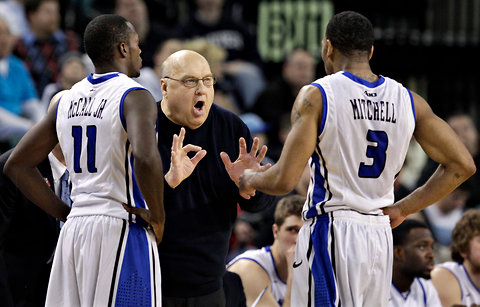 The late Rick Majerus who recruited this team and prepared it for national prominence.

SLU will face the Western Athletic Conference tournament championsÂ New Mexico State Aggies on Thursday at 1:10 pm CDT. The universities have storied programmes and a shared past. They both for many years were elite teams of the Missouri Valley Conference which both abandoned in the world of changing basketball-college allegiances. SLU was in the conference from 1937 until 1974. New Mexico StateÂ was in the glorious conference from 1970 to 1983 andÂ presentedÂ such stars as “tooth pick” Williamson at guard. SLU which is possibly fielding its greatest basketball team in the university’s history but without superstarsÂ such as aÂ Larry Hughes or Easy Ed Maculey, has not had this athleticism since its Missouri Valley days in the 1970s with Harry Rogers, Eric Jones and other stalwarts. The Billikens are three-deep at guard and can push the ball up the court. They have for decades been a half-court offense relying on three-point shots. Now they have multiple attack options with threes from Kwamaine Mitchell or Cody Ellis and fast-break options with Jordair Jett and Mike McCall. Their three guards of Mitchell, Jett and McCall are definitely final four quality. Their main frontline player has been Dwayne Evans who has emerged into a very solid rebounder and scorer; he was Atlantic-10 all conference. Whether they can stay on the boards with more power-oriented teams will be a challenge but this SLU team is quick, athletic and tough. They held off a frenzied forty-minute VCU full-court press and still won and carried themselves to the A-10 conference and tournament championships.

Saint Louis University is also one of the top five Roman Catholic Universities in the country and has, with the possible exception of Georgetown and Loyola Chicago, one of its premier medical schools. It is a Jesuit university and is a comprehensive university with law school, business school and virtually every other area of academic concentration. It’s basketball team has been its pride and joy: not much pride in recent years although this is the second year in a row in the NCAA tournament. With the best mascot and most alluring nickname, Billiken,Â in the history of American sport, now is the time for the team to move beyond its prior achievements in the NCAA spring madness: well at least since it garnered the de facto national championship in 1948 by winning the National Invitation Tournament. Now is the time for glory and greatness sustained by a faculty committed to academic freedom, due process and holding the administration accountable to shared governance. GO BILLS AND GO FOR GLORY!