Trayvon Martin was killed by a racist, George Zimmerman. Simply put, had he been white, he would not have been stereotyped as an â€œassholeâ€ or a â€œfucking punk.â€ Â An all white jury, or close to it (83.3% white) without apparently a single African American, would not convict a man whom theyÂ construed as a protector against African-American criminals. The racial profiling of Mr Martin the jury could not understand. They could not move from an ideological position of entitlement, that this is our land, not the “other.”Â The prosecution in this case laid out a very clear timeline of bias and aggression prior to the shooting. There is no question that the altercation would not have occurred had Mr Zimmerman done what he was told and not pursued an unarmed junvenile. While not illegal for a non-African American to get out of his car and WALK down a street, his stalking Mr Martin led to the fight, that led to the racial killing of Trayvon. Apparently the jury felt that Mr Zimmerman was entitled to demonstrate bias, pursue an individual who was doing nothing wrong, get into fight, claim self-defense over superficial head wounds, stick a gun into the chest of a juvenile and walk freely from the courthouse.

The jury was clearly unable to seeÂ outside of the lens of race: An adult killing a child stalked in the dark by a killer with a gun who had a preconception of African-Americans as a threat to law and order. Unbelievable!Â They believed a teenager walking home can be shot and killed by a stalking, racist, neighborhood watch-person. They knew if they did not convict, their family and friends would shun them. This is the South; this is Florida; this is America where the colour line is still tightly drawn. This is our community and you cannot enter. This is our land, not yours. We will kill you with our guns if we donâ€™t like you. We will arm ourselves under the new White south as the privileged, entitled race has always done from slavery, to Jim Crow, with its lynchings, White Leagues, White Citizens’ Councils, Pale FacesÂ and all white juries.

The Roberts court has shown an equal amount of racism in this summer of hate as we prepare toÂ celebrateÂ the 50th anniversary of the epic March on Washington for Jobs and Freedom. In their latest rendition of theÂ Plessy decision called Shelby County, Alabama v. Holder, the Supreme Court gutted the magnificent, effective Voting Rights Act of 1965: the glorious ascent that secured voting rights that drove much of the civil rights movement. Now that law is gutted with the vacating of Section four that provided a road map of metrics that required pre-clearance before voting irregularities or changes could occur. The Roberts court has set the tone in which all-white juries and predominantlyÂ white legislatures and stand your ground laws (even if not invoked in the Martin murder) are targeted to keep African-Americans from equal access to voting rights, to public streets, to justice. 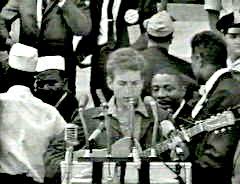 Â Bob Dylan at March on Washington singing tribute to Medgar Evers, “Only a Pawn in Their Game”

How do I explain this as a European-American to my African-American History class this fall? How? Note how we generally hyphenate non-white Americans (granted the preferred term of African-Americans) as to designate them as not fully integrated into the great “Melting Pot” of assmilative America.