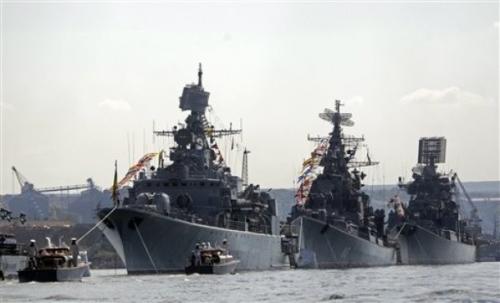 Russian Federation Black Sea Fleet in Crimea, Ukraine. Its only other military base outside its homeland is at Tartus, Syria in the eastern Mediterranean. We need to abolish bases and militaries but in the meantime, Russia feels overly “contained” by the west.

I have been watching RT cable: the Russian cable network that is clearly representative of Kremlin views but very professionally managed with excellent on-air talent. Even C-SPAN has been rebroadcasting some of its programming such as exiled President Viktor Yanukovych’s press conference in a mall in Rostov-on-Don.Â It is quite informative but nevertheless is uncritically accepting of the Russian Federation’s expansion of its pre-existing military presence to Crimea. A peninsula in the southern part of Ukraine that the czars possessed centuries ago. In 1954 First Secretary of the Communist Party Nikita Khrushchev, shortly after he came to power, gave it to Ukraine without anticipating that Ukraine would achieve independence in a post-Soviet world.

I also watched Face the Nation, Meet the Press with the ever-smiling militarist David Gregory and ABC’s This Week with George Stephanopoulos. While the ever-present voluble Secretary of State John Kerry appeared on all three shows but not on FOX, I noticed none had a Russian official or Russian-ethnic expert from Ukraine. All the guests and panelists were American and none analysed the Russian perspective on a coup that voided Â the election of a democratically elected president. The commentary was shallow, elementary and a failure in educating the public on the rather complex nuances of Russia geopolitics and their restraint in its application.

Vladimir Putin’s army has not fired a shot. There has been no bloodshed. Russian army units have not dispersed outside of Crimea with a 58% Russian-ethnic population that adores Russia and seeks its support. Russian troops have not stormed into the eastern part of Ukraine that also contains significant populations of Russian-speaking ethnics. While the entire focus of the US media has been on the chess-match between President Obama and Putin and what the former can do to roll back Russian penetration of the peninsula, none has engaged in an objective analysis of the problem or Russian restraint. The Cold War cometh again in the eyes of those who seek confrontation with Russia. Putin does not desire a return to such a position of tension but he is determined to maintain the territorial integrity of Russia and to pick his areas of forward defence. N.A.T.O. enlargement to twenty-eight nations I have argued is the source of Russian unease and this action is an attempt to forestall further western penetration of traditional spheres of Russian influence.

Under the circumstances, Russia has acted with restraint and so should the imperial west. President Putin is supporting legitimate self-determination efforts in the Crimea. He has received permission to protect Russian-ethnics in the eastern part of Ukraine from the Federation Council–the upper house–should that decision unlikely be made. Such permission may indeed temper the furor of the revolution that drove President Yanukovych into Russian exile for the”mass murder” of less than a 100 partisans. All deaths are to be mourned but mass murder charges suggests an irrational response on the part of the coup that drove him from power. Governments have traditionally spilled more blood than that to protect its legitimacy and right to govern. Russia’s expansion of influence in Crimea may have a salutary effect in calming down the coup, establishing a clear message that Russian-ethnics are not to be persecuted in the east and creating a status quo of reasonable stability.

It is hoped that Russian restraint so far will remain that way: That a ruling coalition of Ukraine and Russian partisans can govern. That the Crimea referendum of inevitable self-determination and autonomy will be respected by Kiev and the American government that hypocritically supported Kosovo independence from Serbia.