Secretary of State John Kerry has accused the Russian Federation of behaving in a nineteenth-century manner as a result of its military movements in Crimea. Note: it could hardly be called an invasion in a nineteenth-century sense since Russian troops were already deployed there on base. True they fanned out into areas of the Crimean Peninsula so perhaps this is a mini-invasion. In any event, Kerry’s effort to characterise Russian actions as reminiscent of large land-based armies invading its neighbors two centuries ago is exaggerated, fulmination rhetoric with a faulty memory of history.

Then Senator Kerry in 2003 voted for exactly the type of invasion he now purportedly loathes when he supported the authorisation to use force by war criminal President George Herbert Walker Bush. This was followed by criminal invasion of Iraq in a nazi style attack. Secretary Kerry coveting the Democratic Party nomination in 2004 supported the blatant lies of the Bush Administration that Iraq possessed biological and chemical weapons and was on the verge breakout in nuclear weapons’s deployment. I was not astonished by such hypocrisy but noted that his thrice repeated comment on Sunday talk shows was not challenged or compared to post-nineteenth century US acts of aggressive and unjust war.

Crimea is not Iraq. Crimea was historically Russian. Iraq was not part of the American empire. Crimea has a majority Russian-ethnic population with many born in the Russian Federation. Iraq was Muslim nation without an American-historic presence. President Vladimir Putin has claimed the majority population in Crimea require Russian protection. Well that may or may not have been a figleaf for geopolitical penetration but 1983 according to my calendar is in the twentieth century–the LATE twentieth century. That is when the United States President Ronald Reagan invaded Grenada, a tiny island in the Caribbean to protect supposedly upper-class privileged American medical students studying at St. George’s Medical School. They needed no protection; it was a lie in order to direct the political future of Grenada following Â a coup thatÂ deposed Prime Minister Maurice Bishop. Russian actions in Crimea followed a coup that removed a democratically elected president: Victor Yanukovych. 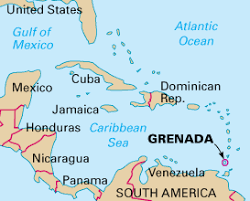 Look carefully, and you may find the tiny nation of Grenada that the US invaded in 1983.

Crimea isÂ 10,077 sq miles. Chicago is 234 sq miles.Â Grenada is 132.8 sq miles. Get the picture? Americans killed Grenadians; thus far the Russian troops have harmed no one. Secretary of State Kerry’s expressed horror at Russian actions is propaganda and a blatant revisionist history–revisionist history is wondrous when accurate–that ignores much worse twentieth and twenty-first century transgressions on the part of the United States. Mr Kerry’s rightward path from Vietnam Veteran Against the War, the Winter Soldier Investigation to ignoring subsequent American war crimes as he rose to power is despicable and a clear path in examining his cynicism and venality as an individual.