Vladimir Lenin was the chief mover of the Russian Revolution in 1917 that overthrew the Czars, the final ruler being Nicholas II. Following the initial 1917 February revolution, Lenin returned to Russia by sealed railcar through Germany, and in somewhat counterevolutionary fashion takes aim atÂ the erstwhileÂ revolutionary ally–the provisional government ofÂ Aleksandr Kerensky. This culminates in the second Russian revolution, the transformational October Revolution, thatÂ brought communism, or at least a centralised Leninist revisionist model of it, to the first nation-state.

In Lenin’s, Imperialism: The Highest Stage of Capitalism (1917), the epoch figure was clearly influenced byÂ John A. Hobson (1858-1940), Imperialism (1902) and of course the monarchial decadence and capitalist slaughters of the Great War. Lenin described how capitalism in its mania for production and irrational pursuit of profits is unable to find adequate domestic demand to consume its products. The slave labour of the proletariat is dehumanised with greater efficiency as it produces a cornucopia of products that sit unsold in warehouses as the immiserated masses cannot consume the products they produced according to the labour theory of value. 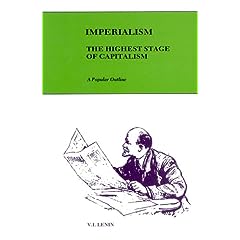 To find new markets, capital seeks new colonies, new navies to protect sea lanes, new markets on a global basis. Indeed imperialism has always been chiefly motivated by pursuit of wealth. I am not an economic determinist and hardly an advocate of the centrality of power underÂ Marxist-LeninismÂ and willing to concede that imperialist urgings are also motivated by religious, cultural and nationalist impulses. I do agree, however,Â with the Marxist-Leninist critique that construes profit and wealth enhancement as the driving force behind war, grotesque standing armies and imperialist, racist colonialism. The monster Christopher Columbus had a cross on the masts of his sailing ships, but his primary reason for sailing west was a short cut to the riches of India.

Capital in its business formation develops monopolies that utterly devastate and control theÂ mode of production, the financial and credit markets and of course the supine, sycophantic governments of the superstructure. As Lenin put it so succinctly: “[I]mperialism is the monopoly stage of capitalism.” Free competition which is the sine qua non of capitalism is eviscerated by proletarian labour and monopolies that thwart open competition in and between firms.

The result of desperate monopolyÂ capital is a global coordinated effort to seek farflung markets.Â This is not consummated withÂ free trade but cartels that control the Earth’s riches; this is war, conquest and subjugation in order to develop GLOBAL MONOPOLIES. Conflicts result, subject peoples resist, capitalist nations turn on each other as they compete for diminishing returns from Asia to America.Â Capitalist-internecine wars lead to the destruction of capitalism and the emergence of a socialist mode of production.

While this model obviously is imprecise as we witness the impoverishment of America and the decline of theÂ global hegemony of capitalism, wars have ruined our nation in pursuit of profit. The wars in Iraq and Afghanistan and the permanent deployment of American soldiers in Korea, Japan, Italy, Germany, Turkey and at sea are chiefly the result of economic imperialism and are plundering the financial solvency of the country. Yes other factors induce such extravagance but economic factors are dominant.

Capitalist governments from America to Iceland to Canada to Indonesia toÂ Germany are frantically trying to rationalise their economic order of greed, rapacity and aggressive free trade. Trillions of dollars are flooding the dying insurance industry, the banks, the financial markets, as the system is disintegrating. Of course in America, such ersatz socialist tendencies do not touch the masses. The people on food stamps, on minimum wage, in emergency rooms for health care are increasing. Relatively few dollars goes to people to pay their mortgages, their credit card debts but primarily to the malefactors of great wealth such as AIG, Citigroup and J.P.Morgan Chase.

Yes, Marx and Lenin knew such a system would fail. I am not advocating a socialist system on the Russian-state model from 1917-1991 but a socialist system in which people rule, more economic equality is realised and the use of force vastly diminished.