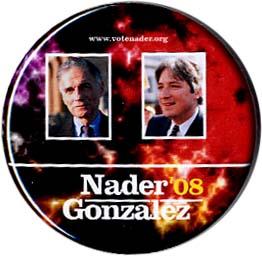 In Illinois, early voting is allowed from October 13, 2008, through October 30, 2008. I voted for the Nader/Gonzales ticket in Illinois on October 28 and was surprised at the numbers of early voters in long lines. While I hope Senator Barack Obama wins the presidency, I could not in good conscience vote for Senator Joe Biden as a result of his prowar vote to Authorise the Use of Force in Iraq in October 2002. Because of his imperialist ambitions, I could not support the Democratic ticket. I did give Senator Obama the maximun allowed under federal election law for the primaries and met him and spoke to him at a fund raiser. I was also on a conference call with him as well during the New Hampshire primary. I also gave a similar amount for the general election but they graciously returned it upon request.

I would have voted for Governor Sarah Palin for vice president due to the liberal and (some conservative savants), savage, misogynist attacks on her that reek of elitism, intolerance and meanness. She is clearly qualified to be vice president, if not president, due to her current status as governor of Alaska but I could not vote for her without voting for Senator John McCain. I revile and loathe him for his Vietnam crimes against humanity and his gratuitous support of Israel and Manichaean vision of the world. Also my trepidation in Senator Joe Lieberman having a senior position of authority such as Secretary of State in a McCain administration gave me pause to support the Republican ticket.

Ralph Nader is one of the pivotal figures in postwar America who has remained relevant and committed to peace and justice, a more open electoral system and a democratic socialism to replace the rapacious greed of American unbridled capitalism. His career as consumer advocate gives him experience and demonstrated judgment that would make him a wonderful president of the U.S. Recognising his position as one of earnest dissenter as opposed to likely candidate to be elected, I would prefer that of the major party candidates, Barack Obama prevail despite his cynical and irresponsible choice of a running mate.

It is being reported my advisor in college, Dr Howard Zinn, is endorsing Ralph Nader. He had endorsed Senator Barack Obama but is now urging voters in non-slam