The Depression Comes to Sarasota

I was in Sarasota which is a Florida city on the west coast, south of Tampa and not far from Clearwater on the Gulf of Mexico where the N.F.L. players embarked prior to their demise during their fishing excursion.

My hotel was empty. The palm tree lined thoroughfare where I parked my Avis-rentedÂ VW Bug had no other cars on it for hours at a time. The pool had no swimmers; the chairs and lounges around the pool were in neat parallel lines to the pool, with no customers. The hotel beach was empty and the cabanas and other chairs were not used. I was virtually the only one there.

Siesta Key Beach, one of the great beaches in the world, was jammed pack withÂ  sun worshippers. I was there on a Wednesday afternoon and it was humming on a weekday, prior to Spring Break when people are working presumably. Well, public beaches are full of unemployed people looking for a diversion from the dreary landscape of unbridled, monstrous capitalism. Hotel beaches lay desolate; public beaches are teeming with folks. In fact I could barely find a place to park as cars whisked in and out of free parking areas.

One evening I went to O’Leary’s Tiki Bar and Grill a modest restaurantÂ that wasÂ reviewed by theÂ New York Times.Â {See below photo from the Times.} As you can see it is rather unpretentious. I was waiting in line to place my dinner order when I noticed the woman in front of me was pleading for a job. While she was alone, she said her son had been laid off, she had lived “in town for thirty-one years,” and would they hire her son? The order taker said they don’t have servers, people take their food to the tables and return their trays. The woman said, “Oh, my son can cook, can clean, he is a hard worker.” Then she was given a form to fill out. I then ordered my two veggie burgers but despite the austral winds and the shimmering Sarasota Bay, dinner was more contemplative than pleasant.

The day after I returned to Chicago there was a message on my machine from the hotel general manager thanking me for staying there. I had never received a follow up call before from a hotel that is testimony to the depression sweeping Florida which has one of the highest home foreclosure rates in the nation.

This may not be a statistically accurate economic analysis of Sarasota but I believe my experiences and encounters are testimony enough that the depresssion that began in December 2007 under the warlike, cruelÂ Bush administration has come to placid Sarasota. 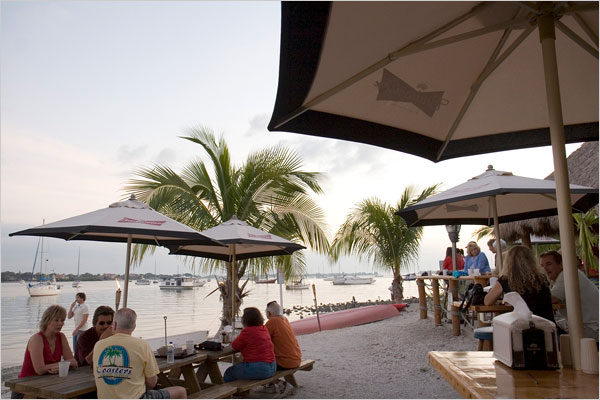