Okinawa: The American Empire Shrinks One Inch at a Time 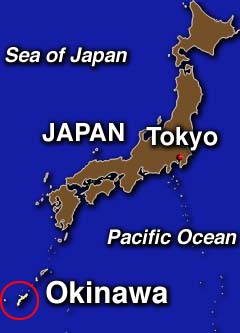 For years Okinawa, which is part of Japan, has been a de facto American colony in which American military personnel, particularly marines, have raped women  and school girls and essentially appropriated the island for hegemonic purposes. There is deep resentment over American military presence on the island, which was the scene of a major, absurd, senseless battle toward the end of World War II in 1945. Some 250,000 casualties of killed and wounded took place at this gratuitous horrendous battle in April-June 1945. Casualties included 38,000 Americans wounded and 12,000 killed, more than 107,000 Japanese and Okinawan military personnel killed, and perhaps 100,000 Okinawan civilians who perished in the battle. I wonder how many babies were killed in Okinawa. Don't forget the babies who die in war as we glorify state-sponsored terrorism in this country instead of condemning it as evil and monstrous.

Eight thousand (8,000) marines are scheduled to leave Okinawa for Guam, an American island in the Pacific. Okinawa is a small island that has borne the brunt of "hosting" about half of the American imperialist forces in Japan. About 50,000 American military personnel are in Japan, sixty-one years after the end of the Pacific War, and so about 15,500 troops will continue to reside on Okinawa alone. Okinawans have a deep and bitter resentment over the presence of American forces on the cramped island and desire that American military property be returned to the people there.

Part of the opposition to American military personnel is juridical autonomy. The U.S. asserts that rapists and other military alleged criminals be tried under U.S. military jurisdiction while Okinawans believe their courts should adjudicate criminal acts. I think a country that is given the permission to base soldiers in third countries should, as a sign of gratitude and basic decency, allow sovereign states to use their law and legal processes to handle alleged criminal acts by U.S. military personnel. The U.S. must be given less latitude in determining criminal and bestial acts committed against innocents in their far-flung empire whether it be in Haditha or in the hopefully totally American-military-free-zone in Okinawa.

Kadena Air Base is a sprawling facility on the eastern edge of the island that occupies about 132 acres. Hopefully, American forces will end their "occupation" of the island and return to the lofty confines of U.S. basing. The presence of American forces in Japan is unnecessary, their continued presence in South Korea is destablilizing and threatening to North Korea and frankly any Asian presence is beyond comprehension in terms of American national security interests but necessary for American imperial interests. At the end of the day, we desire the total destruction or devastating immiseration of the People's Republic of China with its 1.3 billion citizens. This is the America that we unfortunately live in today.