Cartoon from The Guardian 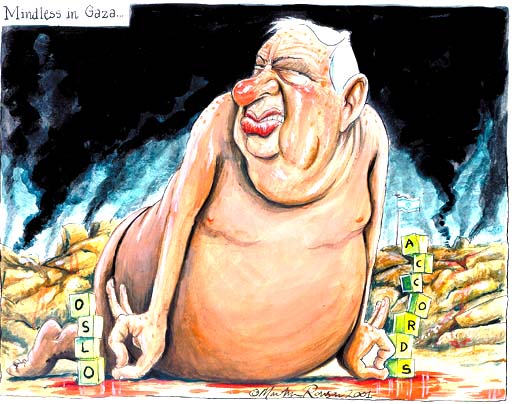 Oslo agreement (first paragraph in quotes from The Guardian)

"The outline peace deal worked out in negotiations between Israel and the Palestine Liberation Organisations (sic), secretly conducted in Norway. The agreement was sealed with the famous handshake between Yasser Arafat and Yitzhak Rabin on the White House lawn in September 1993."

The cartoon depicts former Likud Primer Minister Ariel Sharon who, while temporarily withdrawing forces from Gaza, was clearly guilty of brutal, terrorist war crimes at the Sabra and Chatila Palestinian Refugee camp in which 600-2,000 innocent internees were slaughtered with the approval of the Israeli Defence Forces during yet another criminal Israeli invasion of Lebanon in 1982. He also provocatively instigated the second Intifada with his visit to Haram al-Sharif, the third holiest site in Islam located in Jerusalem in September 2001. Israel refers to it as Temple Mount in reference to a temple that was sacked by Rome in the first century A.C.E.

The military humiliation of Arab peoples has been a constant from the mandate period through the State of Israel's existence. The few have dominated and militarily slaughtered the many. Yet the correlation of forces, due to years of guerrilla war and asymmetrical combat, has created new Vietnams for western imperialist nations. Iraq is lost and a bloody sore for America. Israel has not been able to use its terror weapons to annihilate Hezbollah. I am a pacifist and think war is utterly immoral. As a historian, however, there is little doubt that part of the seething Arab rage against the U.S. and Israel is their technological capacity to humiliate and oppress less powerful Arab peoples. The tide seems to be turning in terms of quick military victories which will either lead to more Vietnams or a rise in Arab nationalism and power that might lend itself to a diplomatic outcome.

Understand that Israel and the U.S. are warrior states. They have little concern about the welfare of subject peoples who oppose them or  who do not comply with their geopolitical strategies. Yet even ruthless states do not want to be destroyed and perhaps overtime, they will come to believe that all their weaponry and C3I cannot pave over the Middle East in their image and some type of sustained creative diplomatic engagement is essential on moral and national-security grounds.