Israel’s Day of Atonement: Will it Include Cluster Bombs in Lebanon?

For Jews, this is Yom Kippur that begins Sundown on October 1 and lasts about twenty-five hours through October 2, 2006.

From TheFreeDictionary: "A holy day observed on the tenth day of Tishri and marked by fasting and prayer for the atonement of sins. Also called Day of Atonement."

I wonder if Israel and world jewry would consider the following for reflection on this day?

In the final seventy-two hours of the Israel-Lebanon war in August 2006, Israel devastated Lebanon with thousands of cluster bombs. This is a weapon of mass destruction that releases over the size of two football fields little bomblets that destroys anything in its swath of destruction. Cluster bombs are small explosive bomblets contained in a large cannister that releases its payload, and disburses these bombs over a wide area. The bomblets may be dropped by fighter aeroplanes, rockets, and by artillery fire.

However, perhaps up to 40% of these relatively small but lethal weapons do NOT explode but lie dormant on the ground until somebody steps on them and detonates their explosive yield. Israel deliberately used these terror weapons against CIVILIAN targets, not armies on a battlefield, knowing that for months and years afterwards school children, pregnant women, farmers, delivery people and construction workers would continue to die.

David Shearer, the United Nations humanitarian coordinator for Lebanon, was quoted in a Washington Post article carried Thursday September 28 in the Chicago Tribune, as observing: "It's impossible for me to work out what the logic was…To me, it just seems outrageous that it would happen as it did." When Israel used these weapons against civilians in their barbaric and inhumane attack on Lebanon in 1982, including a siege of Beirut with the water-system turned off, the Reagan administration imposed a six-year ban on supplying Israel with cluster bombs. A congressional investigation had concluded Israel did not use these against hard or military targets but against non-combatants.

Perhaps 400 to 600 sites in Lebanon are littered with these  bomblets and while Israel manufactures its own, you can be sure some if not most were supplied by its patron of terror, the United States.

Does Israel atone for these sins of cruelty? Does the Jewish nation reflect on its peoples' history of arbitrary killings and persecution and construe similar treatment of Muslim peoples as justified? Does it have no shame in gratuitously and wantonly, out of hate and racism, to deposit such weapons at the very end of a war so that deaths would continue to happen AFTER a cease fire?

Surely, Israel is not alone as a nation-state with blood and mass murder on its hands. However, this is the most sacred holiday for that nation and its people in the diaspora and maybe for a moment, they can think about the babies and other innocents who will die from their unholy and unseemly strategic bombing in July and August of 2006. 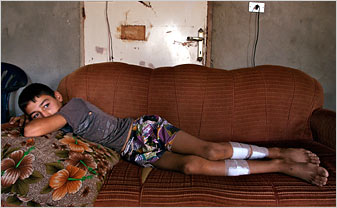 Abbass Ahmad Sultan, 14, was wounded by shrapnel from one of an estimated one million unexploded bomblets left in southern Lebanon.