American Traitor, Sandy Berger, You May Get Justice Yet

Samuel R. "Sandy" Berger, who was President Clinton’s National Security Advisor, was caught stealing classified information from the National Archives in September and October 2003. He stole documents according to the Washington Post:

"The documents that Berger has acknowledged taking — some of which remain missing — are different drafts of a January 2000 "after-action review" of how the government responded to terrorism plots at the turn of the millennium. The document was written by White House anti-terrorism coordinator Richard A. Clarke, at Berger's direction when he was in government." 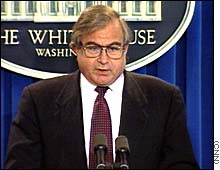 An American Traitor and Thief

This traitor was apparently trying to conceal misdeeds or unflattering actions that would cast his counterterrorism actions in the Clinton years as non-productive and ineffective. He put documents that protect our country in his underwear and his socks and destroyed them when he got home. He lied, like most senior national security officials by saying it was "unintentional," but was caught, eventually pleaded guilty and given a slap on the wrist of a $50.000 fine. If I had done that when I did research in the National Archives for my doctoral dissertation in Washington or for a refereed article on the Manhattan Project in Chicago, I would have been arrested, thrown in jail and fired from my teaching position. Look, Dr Richard Yanikoski suspended me for antiwar e-mail protest, that he found offensive. So imagine if I had done something illegal and immoral as opposed to denouncing the "aggressive baby-killing tactics of collateral damage," I would have been kicked out of academia.

This thief, who I believe might have become secretary of state in a President Kerry administration, if not Richard C. Holbrooke, may finally get his due. The House Armed Services Committee chair, Duncan Hunter and Judiciary Committee chairperson, James Sensenbrenner both Republicans have asked the House Government Reform Committee to investigate. If they do this and if it would lead to a criminal indictment perhaps under the Espionage Act of 1917, it would bring honour and glory to the G.O.P. As bad as the Mark Foley coverup was, I think the Berger disgrace is representative of even greater moral laxitude and a clear and present danger to the United States. Foley solicited young minors and should have the book thrown at him, if illegal. Traitor Berger stole classifed documents used to explore the sources of terrorism and never went to jail. He should get life in prison or at least an extended prison term of 10 years or more. At minimum, any government pension or emoluments should be suspended immediately.