Bob Dylan was quite busy in 1963. He performed before Glenn Beck did on the steps of the Lincoln Memorial at the March on Washington event in August 1963 that is most noteworthy for Dr King’s “I Have A Dream” peroration. He was not allowed to appear on the Ed Sullivan Show despite the host’s urgings because of CBS censorship: they did not want “Talkin’ John Birch Paranoid Blues” to be performed because of its criticism of the Tea Party-like John Birch Society and some far-right crazies such as George Lincoln Rockwell. He included it among his set at Brandeis on Friday May 10 as he was perhaps prepping the song for the May 12 Ed Sullivan Show. Two days later he rehearses “Birch”Â prior to the Ed Sullivan Show but is kicked off the show by CBS censor, Stowe Phelps. It will be interesting to hear if the Brandeis audience reacts to it as appropriate satire or not. Who said McCarthyism ended with Senator Joe’s censure in DecemberÂ 1954?

Dylan also went to Greenwood, Mississippi in 1963,Â given iconic statusÂ in D. A. Pennebaker’s Dont Look Back folkumentary, to support a S.N.C.C. voter-registration drive. Of course Pennebaker was not in Greenwood but used Ed Emshwiller’s originalÂ videography as a historic clip in the film. 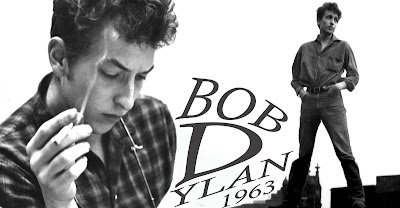 I recoil at the cigarette omnipresence of Dylan images but while it did not kill him, those who have attended his concerts in the last decade or more can hear what the Marlboro “man” did to his voice. Wrecked it!!

I ordered recently the latest so-called ninthÂ Bootleg version of Dylan’s earlyÂ oeuvre to be released in late October. I get an email from Amazon informing me I was receiving aÂ free bonus as well. Beware of freebies but this looked legitimate. It said I would receive in addition to my order, the Brandeis CD:

“Bob Dylan: In Concert, Brandeis University, 1963” has never been heard, bootlegged or circulated in any way and will arrive to you with the CD you’ve ordered.

The seven songs appear too limiting to sell as a stand-alone CD. Recall this was a folk festival not a Dylan concert and so this bonus CD is a marketing ploy to capture more futuristic CD orders. Apparently this was the setlist of Dylan when he appeared on the first day. Certainly the Cuban Missile Crisis of the preceding October was the event that precipitated many of his antiwar songs during this period. While they becameÂ iconic anthems during Vietnam, they were more anticipatory than contemporaneous to that event:

This two-day folkie event was held Friday and Saturday (May 10-11) in Waltham, MassachusettsÂ on the campus of Brandeis. The university was named after Supreme Court Justice Louis Brandeis who had a problem with free speech, especially antiwar speech: see his infamous clear and present dangerÂ votes on the Schenck and Debs cases that forever disgraced his role as a justice in this country. Imagine naming a university after someone like this. Ethnicity trumps honour. To return to the main event: very little has been written about this festival but it is mentioned in Robert Shelton’s, No Direction Home and plagiarised in Clinton Heylin’s, A Life in Stolen Moments: Day by Day: 1941-1995 (44). Heylin clearly got his information from Shelton, as did I, who actually attended the Brandeis event,Â and did not credit the latter,Â a New York Times music critic.Â Â It was probably one ofÂ Heylin’s many execrable Stolen Moments in the book with repulsive thievery of another’s work. Shelton went out afterwards with Dylan, his true love Suze Rotolo who shared the cover of Freewheelin’ and Ric Von Schmidt, a Bostonian. While I always thought Shelton was too adoring and close to his brilliant subject, he helped launch Dylan’s career with a favourable 1961 review in the Times shortly after Dylan arrived from Minnesota, via Chicago, to his new haunts in Greenwich Village.

Yet until recently, no setlist was extant and I have still not seen any review of the 1963 Brandeis event. The CD might help piece together this seminal year in Dylan’s career as he went from bluesperson to freewheelin’ folkie and activist. Unfortunately Dylan would eventually turn away from pure folk to a more electronic folk-rock with somewhat less social engineering in his music. It may have retained the lyrical power of folk but let’s be honest, it pretty much abandoned the social commentary of his second and third albums. Yet the Brandeis-folk festival is soon to emerge in all its glory with at least Dylan’s work. All of this stuff in the wake of the Cuban Missile Crisis and on the eve practically of the Free Speech Movement at Berkeley, the Vietnam Holocaust and epic resistance to the genocide.