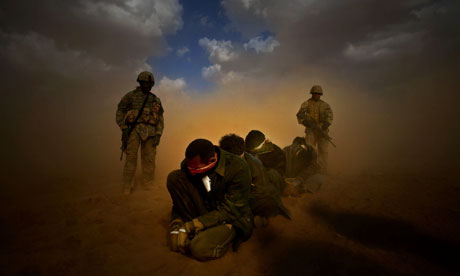 “The documents on WikiLeaks describing human rights abuses in Iraq may implicate British as well as US forces, a human rights lawyer has said. Photograph: Jehad Nga/Corbis.” From The Guardian newspaper.

WikiLeaks Julian Assange should win the Nobel Peace Prize for unmaskingÂ the UnitedÂ States of America’sÂ war crimes in Iraq–as if we did not already know. Some 400,000 documents have been released in heroic fashion by this pro-peace, anti-war, anti-war crimes group. It uncovers the hidden, undocumentedÂ deaths of 15,000 civilians: America has its own Katyn Forest massacre on its hands! The US we know tortured and slaughtered innocents in that country and has generally exonerated war-criminal soldiers when faced with judicial punishment.Â  I wrote a letter that was published in the New York Times on the Abu Ghraib torture chamber. Wikileaks’ dissemination of torture and mass murder documentation demonstrates the other half of the coin. The other side is US toleration and condoning of Iraqi death squads emulating and perpetrating such horrors as well during the bloodletting sectarian violence unleased by war criminal MrÂ George W.Â Bush’s campaign against non-existent weapons of mass destruction. Why is he still around shilling his book and not in prison as a mass murderer? Civilians slaughtered, detainees (we used to call them POW) now called non-combatants are butchered as if the Geneva Conventions were an illusion instead of international law. Whether death squads orÂ armed personnel, the US did nothing to prevent this transgression of international humanitarian law. None of this is terribly surprising but it is refreshing when reported by major progressive media outlets such as Al Jazeera and the New York Times.

This image is from theÂ German paper, Der Spiegel, one of three newspapers that received WikiLeaks Iraq war logs. The other paper without images here is The New York Times. Al Jazeera a TV global network was the fourth media outlet to receive these materials.

General David Petraeus is the “American General.” The Marshall, the Ike, the Patton who is revered on both sides of the aisle. I question his capacity to wage war with honour although I admit no war can be waged with honour due to its barbarity, savagery and immorality. But the Princeton educated smoothie has blood on his hands. He is now running the unjust war in Afghanistan with its robotic lethality in the same manner as his Iraq disgrace. We are killing 100s if not 1000s of innocent bystanders with drone aircraft flying over Pakistan: Have you not heard? We are in three wars: or perhaps two and a half. Iraq, no that has not ended; Afghanistan, welcome to Vietnam, is a full-scale war; Pakistan, in the so-called hazy border areas with Afghanistan in North Waziristan and elsewhere, we are witnessing cowardly, casual strategic bombing being managed by Diet Coke sipping cowards doing their “playstation” thing back in the states. Such depersonalized approach to war is one more quivver in the world’s collection of argumentation that the United States is simply a threat: a grievous monstrous threat to international peace and security.