American hero, Jane Fonda, on her save the children campaign in Hanoi. She had the courage to try to stop this genocide against an Asian people that was no threat to the U.S.

I wrote an article, see link below, in which I claimed in a couple of sentences that C.O.S.V.N. did not exist in any meaningful manner in Cambodia that President Nixon invaded in 1970. Professor MoÃ¯se disagreed and began to articulate his views in comments. Some argue that North Vietnam had a huge, well-organized command structure in the south during the Vietnam War. It was called the Central Office for South Vietnam. In the post right below this, we argue both sides of the issue. I claim it did not exist in any significant manner in Cambodia and that the U.S. either lied or ignored intelligence, {is Mr Bush reading this?} to justify the largest military offensive of the war, Operation Junction City in 1967 and the Nixon invasion of Cambodia in April 1970. These comments appear on History News Network and are reproduced courtesy of H.N.N.

My Lai, an example of genocide in this Asian holocaust.

Re: COSVN in Cambodia (#106652)
by Edwin MoÃ¯se on March 7, 2007 at 11:12 AM
You are getting your information from the sort of Americans who know little about COSVN, because the United States never found COSVN. I try to pay attention to the information that comes from the Communists, who know more about COSVN because they were running it.

COSVN was headed by Nguyen Chi Thanh from 1964 to 1967, and by Pham Hung from 1967 to 1975. Both of these men were of very high rank in the Vietnamese Communist command structure, higher than the rank of anyone the United States ever assigned to command the U.S. military forces in South Vietnam. Men at that level would not have been wasting their time running “an episodic mobile communications device.”

You are wrong in saying “They said this thing was 50 miles from Ho Chi Minh city over the wall in Cambodia.” There were areas of Cambodia within 50 miles of Saigon. But COSVN was not in those particular areas of Cambodia, and I don’t believe the U.S. government ever said it was.

Instead of quoting a reporter who says he thinks senior officials thought of COSVN as a big bamboo Pentagon, it would be nice if you would find a quote from a senior official describing COSVN that way.

And while Langguth was correct in saying that COSVN was spread out in a number of small facilities, rather than being one big one, he is wrong in saying that they could be abandoned on a moment’s notice. Truong Nhu Tang, who was not a member of the Trung uong cuc mien Nam (he was not that important) but was a member of another organization housed in a similar Communist base area in Cambodia near the Vietnamese border, has described some of the preparations that had to be made early in 1970 when the Communists decided to move such organizations northward deeper into Cambodia, away from the Vietnamese border. Elements of the 5th, 7th, and 9th Viet Cong Divisions were assigned to provide security for the move. COSVN, the most important, made the move first, two months before Nixon launched the Cambodian incursion. Tang’s outfit, much less important, was still in its base near the border when the incursion began. Re: COSVN in Cambodia (#106659)
by Peter N. Kirstein on March 7, 2007 at 12:14 PM
You ignored Professor Herring. Do you consider my citing the preeminent historian on the Vietnam War as “information from the sort of Americans who know little about COSVN?”

Re: Professor Herring (#106661)
by Edwin MoÃ¯se on March 7, 2007 at 1:17 PM
Yes, exactly. Herring is really a historian of what the Americans did in Vietnam. He does not deal much with what the Communists did, which I why I cannot really regard him as the preeminent American historian of the war. The book you cite, a broad history of the war, has no index reference for Nguyen Huu Tho, Nguyen Chi Thanh, or Pham Hung, and only one for Le Duan. This reveals a real lack of interest in what the other side was doing. So I cannot take the book seriously as a source for information on what the other side was doing.

If I had to pick the authors who have written seminal works on the war, I would probably start with Jeffrey Race, Neil Sheehan, and David Elliott. Then maybe Andrew Krepinevich? Not Herring. 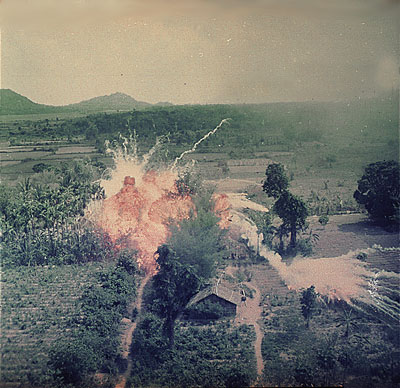 Terror bombing during the genocide.

â€œSince the end of the Vietnam War, it has been learned that C.O.S.V.N. was hardly a Communist â€œPentagon.â€ Rather it consisted of a radio transmitter and a dozen or so individuals who moved around constantly.â€

In the formal entry for C.O.S.V.N., Robert G. Mangrum of Howard Payne University described C.O.S.V.N. as:

â€¦â€ C.O.S.V.N. eluded destruction throughout the war. In terms of organization or structure, it was no more than what the U.S. Army would describe as a forward command post, consisting of a few senior officers and key staff personnel. As a result, it was extremely mobile and moved frequently to avoid capture or destruction.â€

I noticed you were one of the contributors to this anthology.

Perhaps, I am not being ironic, Clemson might host a panel on the following topic:

â€œVietnam: The Battle for History.”

Nick Ut Pulitzer Prize photo of Kim Phuc, unclothed young female: The use of W.M.D., napalm, during the genocide.

Do you believe George Bush was correct in his decision to invade Iraq on March 19, 2003? I am not referring to tactics and strategy but did you or do you support military engagement in Iraq?

Do you believe it was moral and ethical for the United States to wage war in Indochina in the 1960s and 1970s?

Do you believe patriotism means that one should support the troops and defer opposition to their mission until a war is completed?

Are you proud of being an American and do you believe generally speaking, America’s use of military force in its history has been positive and just?

Re: Questions for Clemson University Colleague (#106693)
by Edwin MoÃ¯se on March 7, 2007 at 7:08 PM
None of the questions you ask has any relevance to the issues we have been discussing (did COSVN exist, and how many Americans have been K.I.A. in Iraq). But since you ask:

1) I was neither a supporter nor an opponent of Bush’s decision to invade Iraq, in 2003. I was perched on the fence. I could tell that the Bush administration’s argument for the war was unfounded, but I had very little respect for the Bush administration. I did not assume that Bush’s failure to articulate a valid case for war proved that there was no valid case to be made.

Re: Questions for Clemson University Colleague (#106694)
by Peter N. Kirstein on March 7, 2003 at 7:31 PM
You are a good sport and I will let your answers stand on their own. On my blog I did spell your family name with an umlaut which I know is your preference.

Some confuse C.O.S.V.N. Hanoi’s “office” which was set up in May 1959 even before the National Liberation Front was formed the following year. This was during the Eisenhower administration and folks might be lured into believing it had a correlative, bureaucratic structure in the South or in Kampuchea when such was not the case.

Le Duan I doubt ever left Vietnam during the war, unless he went to China or Russia, and would not venture south of the 1954 partition line. I am not saying you said that directly but he was too important to be sitting in a tent with a walkie talkie on the Ho Chi Minh anti-genocide trail.

Re: Questions for Clemson University Colleague (#106719)
by Edwin MoÃ¯se on March 8, 2007 at 11:10 AM
I have never heard of anyone who confuses COSVN with any office in Hanoi. You say some people do. Can you tell me who?

Oh Where oh Where is C.O.S.V.N.? (#106734)
by Peter N. Kirstein on March 8, 2007 at 2:52 PM
You have made that link for four days that because there were Hanoi personnel running this “Pentagon,” it must have existed. Examples you cite are Nguyen Chi Thanh as director of â€œPentagon Eastâ€ and Pham Hung. I think Tran Do was also a â€œmajorâ€ figure of this “office” who ran the â€œPolitical Department.â€ Yet you provide no evidence these individuals were in the field, outside of the D.R.V. with P.A.V.N. (North Vietnam) forces in either the south or in Kampuchea. Hence you seem to make the assumption if there were staff command in Hanoi, which might have been more titular than operational, there must have been an equivalent entity in the theatre.

Even though I have provided four sources to support my conclusions, and you dismissed each of them, I think the burden of this argument and the evidence marshaled strongly supports my conclusions in a single paragraph of the H.N.N. article.

Of course history is about debate and people can draw their own conclusions from my article, our exchange and other independent sources.

I am a specialist on Vietnam; I actually do know quite a lot about Communist organizations in Vietnam. But I don’t ask you simply to accept the fact that I think COSVN was a substantial organization as proof that it must have been one.

I think it is unreasonable when you cite statements about COSVN made by people who are not specialists on Vietnam, and don’t know much about Communist organizations in Vietnam, and expect me to accept the fact that those people say COSVN was not a substantial organization as proof that it wasn’t.

Re: The question of proof (#106735)
by Peter N. Kirstein on March 8, 2007 at 2:56 PM
Specialists can disagree. This is a prime example. May peace replace war so one day such discussions will indeed be ancient history.

Professor Edwin MoÃ¯se is a military historian at Clemson University in South Carolina.