Professor Steven Plaut is a frequent writer for David Horowitz’s FrontPageMag.com. He is an expatriate American who teaches business at the University of Haifa in Israel and is well-known for using harsh language and ad hominem attacks against his critics and even vituperative language against students who matriculate in classes of professors with whom he disagress. His latest criticism of my activities on his blog (housed at Arutz Sheva website: the ultra-nationalist IsraelNationalNews.com (I.N.N.) includes an effort to rally his confreres to contact my university administration. Professor Plaut should know I have been through this before and that I will continue to express my views and work for causes and principles without fear of coercion or intimidation. The alternative is self-censorship which I construe as unacceptable.

Professor Plaut, who is a hawkish, militant supporter of Israel, is particularly incensed that I support academic freedom for Dr Norman Finkelstein and has apparently only recently learned that I support the right of David Irving to write and speak about World War II. I wonder if Professor Plaut supported the incarceration of David Irving for thirteen months in Vienna for daring to express views some ten years earlier on gas chambers at Oswiecim. The fact that Mr Plaut repeatedly calls me “anti-semitic” and a “rogue” is more revelatory about him than me. I have asked him to produce a single quotation of mine in which I have attacked the Jewish religion or culture. It is typical of sloppy and careless thinkers such as the professor to equate critics of Israel and its apartheid and colonisation of the Palestinian people as reflective of anti-semitism. It is emblematic of an effort to parry reasonable argumentation that supports oppressed peoples by questioning the character of the critic. I stand with President Jimmy Carter, John Mearsheimer, Stephen M. Walt, Norman Finkelstein and others who engage in critical analysis of Israel’s external relations with the Arab Nation. 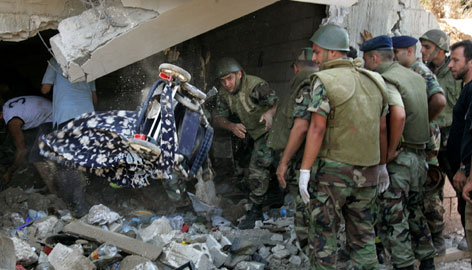 Israel Destruction of Qana, Lebanon in July 2006 is reflective of the absence of Just War adherence to proportionality.

In any event this is a link to my article published by History News Network that Professor Plaut accurately quotes from but omits a statement that I made at the conference hosted by David Irving three years ago in Kentucky:

“I denounce anti-Islamic and anti-Semitic bias. History flows with rivers of blood from ethnic and cultural intolerance. The genocide against indigenous peoples and the Trail of Tears, the mass killings of Armenians at the hands of the Turks during World War I, the war crimes of Nazi Germany, the atomic butchery of noncombatant Japanese in Hiroshima and Nagasaki, the Jim Crow-apartheid system that only ended with the 1964 Civil Rights Act and 1965 Voting Rights Act, and the evil and criminal Vietnam War… The destruction of the â€œcockroachâ€ Tutsis in Rwanda and the killings in Darfur are equally odious. All acts of genocide, discrimination and violence against individuals or groups that are predicated on racialism and ethnocentrism diminish us all, imperil the dream of peace and justice and hinder international reconciliation.”