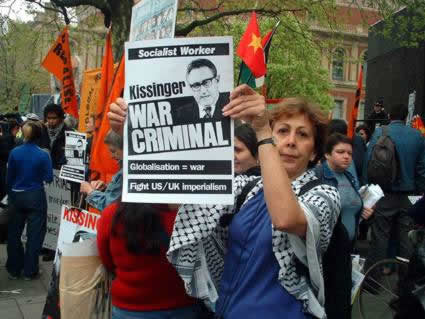 I strongly endorse the actions of those who are protesting this elite monster’s continued privileged status in America. I endorse those who remain outraged at Dr Kissinger’s repeated violations of international humanitarian law, the laws of war and even American law that prohibit undeclared wars. His actions from Vietnam to East Timor to Chile are more in keeping with Nazi Germany and Czarist Russia than one would expect from an American. Of course no protest should ever prevent or intimidate a speaker or organisation from presenting views that it deems appropriate. We are not endorsing heckling or abridgement of Dr Kissinger’s First Amendment right of free speech. Yet protest should be marshaled in a display of revulsion that this war criminal continues to walk the streets of America instead of being confined to a jail cell without a driver and without bodyguards.

Please sign this letter and invite historians you know to join this initiative.

On November 7, the New York Historical Society is holding a fund raiser honoring Henry Kissinger at the Waldorf Astoria. Tickets start at $1000 and go up to $100,000. The $100,000 tickets allow you to also to see Gorbachev and Charlie Rose.

Several groups, including the War Resisters League, Code Pink, War Criminals Watch, the East Timor and Indonesian Action Network , World Can’t Wait are planning to protest outside the event 5:30 – 7:45 in front of the Waldorf, 301 Park Ave. between 49 & 50 St.. We need to remind people about Henry Kissinger’s sordid and criminal history concerning East Timor, Iraq, Vietnam, Cambodia, Chile, South Africa, Cyprus, Bangladesh, Angola, El Salvador, West Papua, and elsewhere. Kissinger is responsible for millions of deaths, millions maimed, millions homeless etc in these war torn places. Some websites state that he is an advisor to the Dept of Defense â€œanti insurgentâ€ efforts in Iraq. Other websites report that Hillary Clinton hired him last October to give advice to the State Dept.

I am a member of the Anti Militarism Committee of Brooklyn For Peace and I am working on this protest . I am writing to you and other historian because I feel that historians should be shocked that the NY Historical Society is honoring one of the worst war criminals in the history of the last 50 years.

Some organizations such as Brooklyn For Peace have written to the NY Historical Society to voice opposition to this event. I am asking historians, organizations of historians or groups of historians to write to the NY Historical Society to protest this event. We are contacting Historians Against War, and other groups. If you can suggest others to contact or pass this along that would be appreciated.

Attached is a letter that we are trying to get historians to sign and then we will send it to the trustees and chairman of the board of the New York Historical Society. John Miller of the East Timor and Indonesia Action Network is gathering the signatures. He can be reached at 718-596-7668; 917-690-4391 (mobile)<mailto: etan@etan.org> fbp@igc.org

We would love to have you ad your signature to this letter.

We write to request that you withdraw the name of Henry Kissinger as an honoree of the New York Historical Society at the event scheduled for November 7, 2011, at the Waldorf Astoria. Henry Kissinger is the United Statesâ€™ most notorious living war criminal, whose many crimes as National Security Advisor and Secretary of State from 1969-1977 include the following:

Â· Approval and direction of mass bombing campaigns targeted at civilians in both North and South Vietnam, and the mass civilian assassination campaign known as the Phoenix Program;

Â· The military invasion of Cambodia starting in 1969, including the approval and direction of mass bombing campaigns targeted at civilians, followed by the overthrow of the legitimate government of Cambodia and diplomatic support for the Khmer Rouge regime;

Â· Approval and direction of mass bombing campaigns in Laos, reducing areas like the Plain of Jars to veritable moonscapes;

Â· Approval and direction of the overthrow of the democratically-elected Chilean government of Salvador Allende in 1973, and unqualified support for brutal military dictatorships in Argentina, Brazil, Chile, El Salvador, Guatemala, Haiti, Honduras, Nicaragua, Uruguay, and other countries in Latin America;

Â· Collusion with the mass murder and rape campaign of the â€œEastâ€ Pakistan military in Bangladesh in 1971;

Â· Authorization of Indonesiaâ€™s illegal invasion and occupation of East Timor in 1975, and the continued provision of U.S. military aid in violation of U.S. law, which enabled an occupation that killed up to a third of the population of the country.

This list could be lengthened considerably. Some observers might contend that Kissingerâ€™s efforts to defuse U.S. tensions with China or his emphasis on dÃ©tente with the Soviet Union somehow redeem him, but this objection misses the point. A serial killer who occasionally donates to charity is still a serial killer. Kissinger remains one of the twentieth centuryâ€™s worst war criminals, and to pretend otherwise is to condone his crimes. It is difficult to understand how the New York Historical Society could consider honoring such a man.

This action on the part of the Society makes a statement that these crimes are of no importance to us as 21st-century New Yorkers, as Americans, and as human beings. We raise Kissingerâ€™s crimes to your attention because as William Faulkner said, â€œThe past is never dead. Itâ€™s not even past.â€ The failure to hold Kissinger to account for his myriad of crimes has allowed him to continue dispensing recommendations for new wars and foreign interventions. The failure to confront this record has facilitated the invasion of Iraq, the use of torture at Abu Ghraib and elsewhere, the policy of rendition and the detentions at GuantÃ¡namo Bay, and other illegal actions of the â€œwar on terror.â€

As historians you are no doubt aware that Henry Kissinger is wanted for questioning in England, France, Spain, Chile and Argentina. Our culture is being poisoned by the failure to remember Kissingerâ€™s and othersâ€™ crimes and to hold them to account. It is a terrible thing to participate in this process of enforced forgetting and impunity, and it also reflects very poorly on the United States in the international sphere.

Many other countries hold their criminal leaders accountable. It is time the United States did so as well. We protest this normalization of the worst kind of criminality and ask you to join us by rescinding this invitation.