Without completely testing whether I have the academic freedom to endorse a candidate, I gave to the Ron Paul campaign at his website. http://www.ronpaul2012.com/ This is the first time I have contributed to a Republican presidential candidate’s campaign either in a primary or general election. I have never voted for a Republican presidential candidate in a general election and rarely Democratic either. I hope the courageous Dr Paul is not elected president. I disagree profoundly with his fiscal terrorism on the US treasury that would basically eviscerate most of the safety-net programmes that have emerged since the 1930s and 1960s. I shudder at the thought of his assault on women’s rights such as the right to choose motherhood after impregnation. I doubt if he would be an advocate for the poor and other oppressed minorities in the United States. His overemphasis on liberty at the expense of equality is unacceptable in the modern era where people in need require governmental protection and sustenance. 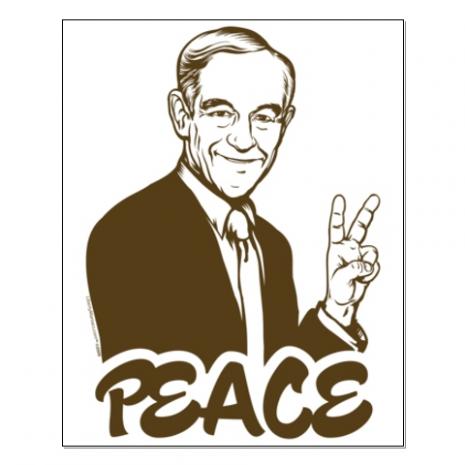 While I am not opposed to the abolition of the Federal Reserve Board, I am not sophisticated enough in macroenomics to know what would be the result of the elimination of a central bank. Of course all methods of monetary policy, which I realise don’t work under Mr Bernanke, would just disappear. So I think Ron Paul is a bit rash in this area but I remain an agnostic whether such a revolutionary proposal has merit.

Look, this man has a vision in the area of foreign policy that is brilliant, courageous, sophisticated, inspirational and one that is rarely allowed utterance in this Spartan-like country of militarism and adoration of violence. Not since Senator Eugene McCarthy’s 1968 anti-Vietnam war primary challenge to war criminal PresidentÂ LyndonÂ Johnson, has a national candidate been able to articulate such a vision. Dr Paul’s genius in recognising the imperial thrust of American foreign policy is remarkable. His steady and even analysis of the Iranian nuclear programme is one of the most nuanced I have ever seen. His knowledge of war and his capacity to weave historical events with present needs is more analytical that we normally see in the Santorum-Gingrich-McCain-Lieberman world of kill baby kill. His opposition to the United Nations is regrettable but as president he could not abolish the institution but could reduce substantially America’s lust for war and penetration of “vital geostrategic areas.”

Dr Paul wants to end the empire, close many of the wasteful and intimidating military bases from Okinawa to Naples. He knows that the imperial, blood-lust notion ofÂ American exceptionalism is economically unsustainable, it isÂ destroying the search for international peace and security and is aggressive to its core. He alone, except occasionally Ambassador Jon Huntsman, describes poignantly the casualties of war and the senseless violence that it unleashes on the latest widowed land. We need to keep his campaign alive in order toÂ to keep his antiwar, internationalist voice alive that is usually suppressed and silenced as I was in 2002.

He rarely goes negative on the campaign trail or in the TV studioÂ setting an example that issues and not personalities are the key to advancing the public’s knowledge and understanding of itself. He is also unrelenting in his vision and refuses to compromise basic core principles in the name of expediency. While the liberal press calls him isolationist, we know he is a liberal internationalist and non-interventionist.Â Whether he is able to consider new thinking in his hostility to theÂ welfare state and legitimate state socialismÂ I do not know. Yet there is no flip-flopping with Congressperson PaulÂ  which one sees with the president and most of the other Republican-presidential candidates. In a word, Ron is not a “politician.”

So contribute to Ron Paul, reserve judgment on whether he is fit to be president, and support his opposition to American imperialism and perpetual war as we represent the world’s leading purveyor of terrorism and destruction.

This entry was posted in External Affairs, Politics/Music/Culture. Bookmark the permalink.