A Pawn But a Perpetrator of Genocide: Enola Gay’s Paul Tibbets is Dead

Posted on November 1, 2007 by Peter Kirstein 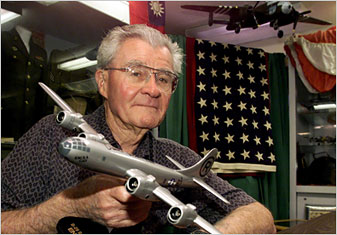 The captain of the Enola Gay, a weapon that perpetrated a holocaust overÂ a city, is typical of America’s disregard for non-combatants and a racist fury that has not abated since this evil moment in world history on August 6, 1945. Mr Tibbets was a colonel at the time but of course was later promoted to Brigadier General for his racist butchery of untold magnitude.

This murderer thought destroying a city of innocents was jocular amusement. In 1976 he flew a B-29 mock atomic run at a Texas, where else?, air showÂ in which a non-nuclearÂ weapon was detonated on a runway that created an ersatz mushroom cloud. I wonder if this monster got paid for the entertainment.

Remember the genocide forever and the evil nation that introduced nuclear weapons into the world’s arsenal. America, you are a killer nation that is responsible for some of the worst examples of state terrorism in human history.

1 The war was over and Japan was on the verge of surrender.

2 An invasion was not planned for months afterwards at Kyushu and the major one not scheduled until Spring, 1946 across the Tokyo plain.

3 Russia would enter the war in days and the A-bomb was not needed to defeat Japan.

4 Japan may well have surrendered if promised prior to the genocide that its monarchy would be preserved.

5 Japan may well have surrendered if given a demonstration in an unpopulated area or in a third country.

6 Japan may well have surrenderd if given a warning.

7 The fissionÂ bombs used against Hiroshima and Nagasaki had political overtones in containing the Soviet Union and were not entirely intendedÂ for military victory but as a political brinkspersonship stunt in the U.S. orchestrated Cold War.

8 Conventional bombing, blockading the Japanese islands would have caused surrender without having to use “Little Boy” and “Fat Man” uranium and plutonium bombs.

9 The U.S. Strategic Bombing Survey concluded that Japan would have surrendered without an invasion, without the use of nuclear weapons and without even a Soviet entry into the Pacific War on August 8, 1945.