NATO: A Terrorist Organisation that Mayor Rahm Emanuel Invites to Chicago for May Summit 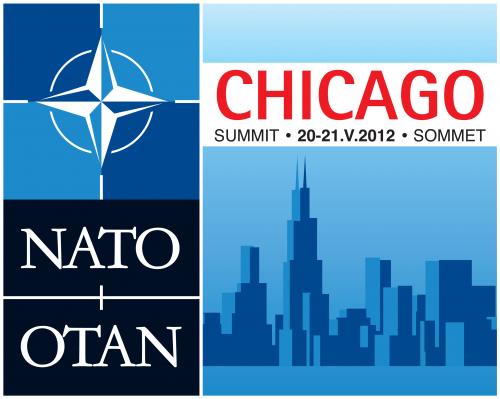 The greatest threat to international security and justice should be resisted with non-violent civil disobedience. It is a disgrace to the City of Chicago to host this violent, selfish, remorselessly aggressive organisation.

The North Atlantic Treaty Organisation was formed in 1949 as the Kennan-containment policy began to crystallise as a global-terrorist threat in defence of capitalism and the maintenance of nuclear superiority. It followed the 1947 Truman Doctrine of waging war against communism in southern Europe, the 1947Â Marshall Plan of buying allies in war-torn Europe through reconstruction aid (none arrived in the east), and the end of the citizen-soldier with a permanent “peacetime” military establishment that has basically snuffed out democracy in the Unites States. NATO is a vile organisation dedicated to war, racism, empire and deathÂ and was countered six years later with the Warsaw Treaty Organisation (Warsaw Pact)Â in 1955–the Russian response to western nations’ formation of this gang. It proved wars, in this case World War II, lead to more wars and a greater militarisation of society as President Dwight David Eisenhower emphasised in his military-industrial complex farewell address in January 1961.

This dreaded organisation that even the French shunned and appropriately rejected for decades, was the principal factor in the horizontal and vertical proliferation of strategic and tactical nuclear weapons. It led to not only the return of 250,000 American troops to Europe, but also transformed the inner-German border into a cascade of conventional and nuclear weaponry that defied even the most logical persuasive argument to balance of power deployments. It was madness and utterly irresponsible. While the Russians, until Mikhail Gorbachev ended the Cold War, were hardly blameless for the failure of World War II to accomplish anything meaningful and permanent in the advancement of international peace and security, they were primarily reactiveÂ to NATO imperialism and brinkspersonship. It was NATO who MIRVed atomic rocketry; it was NATO that moved intermediate-range nuclear weapons into Europe; it was NATO, basically a subaltern branch of the AmericanÂ military, threatening massive retaliation and global nuclear destruction if the Russians were to attack American-occupied Germany or other western interests.

At my university’s commencement exercise tomorrow, May 13, I will be wearing attached to the stupid caps that are still worn at graduation exercises a message in red: NATO EQUALS TERROR WAR EMPIRE & DISREGARD OF GLOBAL NEEDS. I will be the only one protesting war at this event I am sure but will probably encounter little or minimal criticism. If it is more than a little, IÂ am prepared to defend my rights and academic freedom of expresssion.Â I am dubious if the commencement speakers will address the topic of peace and justice but if pleasantly surprised, at this anodyne exercise, I will note in an update. Yet to be fair, I do recall the president of the university, Christine Wiseman,Â referencing peace albeit obliquely at the last commencement and I emailed her my appreciation. So today I wear my little protest sign on my cap. But to return to the main event: an assessment of NATO:

1) Where is the path forward to a future of new thinking and less arms? NATO is the symbol of a world gone wrong: not a hope for a new tomorrow with less emphasis on weapon modernisation, strategic vital interests and perpetual war for perpetual theft from the treasury for the military monsters that run this country.

3) Hopefully NATO will get a warm welcome of protest and civil disobedience during its summit here in Chicago. It is a shameless organisation and its privileged members are utterly incapable of moving beyond the old thinking of allies, geostrategic advantage and a desperation to wage the next war to justify itsÂ farcical and meaninglessÂ mandate of collective national security. It is collective pillaging from the world’s poor and licking their chops for maybe a new containment devil: China?

Update:Â President WisemanÂ at commencement appeared to endorse the NATO summit and to challenge students apparently to pursue deterrence in the wake of possible horizontal-nuclear proliferation. For me nuclear deterrence is an act of monstrous proportions. The United States Conference ofÂ Catholic BishopsÂ in their 1983 pastoral, The Challenge of Peace, endorsed nuclear deterrence asÂ morally acceptableÂ IF it were not pursued as an end in itself and not violative of the goal of progressive disarmament. There can be no moral defence of deterrence given the conduct of the US these past 67 years since 1945 genocidal attacks on Hiroshima and Nagasaki. It remains an end in itself as billions of dollars are wasted in stockpile maintenance, defence strategies of illusion and preserving the triad of air, sea and land-based systems of indiscriminate death and destruction.

I think that is the challenge graduating students should hear. Not maintaining a deterrence in which a nation threatens nuclear destruction on another, if attacked, but the elimination of evil weaponry that can have no moral or useful purpose. It might have been mentioned that President Obama has rejected containment, he really means deterrence, in the case of Iran and has threatenedÂ Iran with possible military destruction if they pursue transparently a nuclear weapon.Â Yet universities are the place where differences of opinion can and should occur. Also university presidents should stake out positions of current concern. They tend to hedge, either fearful of controversy or that it might stifle debate. Presidents should be encouraged and validated for engaging in this type of dialogue. With academic freedom both can occur: An engaged, activist professoriate and a president willing to engage in matters of social and political concern. While presidents must not and should not control dialogue, there is little doubt they can contribute to it.