Smash the Empire: America the Racist, Lover of War and Violence

Kindly put this in your pipe and smoke it. Mr Bush’s 2009 budget includes $588 billion for the war budget to kill, dominate and destroy non-white peoples throughout the world and to contain the terrible radical, non-white,Â Islamic terrorists who want to take away our freedoms. Freedoms for those on death row; freedom for those 47,000,000 without healthcare; freedom for the roughly 37,000,000 in poverty who constitute a shocking 12.7% of the population; freedom for the roughly 200,000 Veterans who are homeless; freedom for the 4.9% unemployed; freedom for hardworking immigrants and especially undocumented workers who are deported and persecuted for trying to make a life for themselves.

Ahh, but terrorist America has money to burn $588 billion annuallyÂ for war–note the little lie of “Defence.” That of course does not include at least $79-$100 billion more for the criminal wars in Afghanistan and Iraq. You see the neocons of the criminal Bush adminstration such asÂ John Bolton,Â Paul Wolfowitz, Don Rumsfeld, Colin Powell, Doug Feith, Condi Rice,Â Richard Perle, Bill KristolÂ  and their acolytes such as Senator Hillary Rodham Clinton, Democrat of New York andÂ Senator John McCain, Republican of Arizona,Â  do not includeÂ Iraq and Afghanistan Â inÂ fiscal year 2009 budgetary outlays but add them later as supplemental requests. This is just another sleazy effort to conceal the trueÂ costs to the American people of what a monstrous, militaristic empire is doing to itself and to the victims of its rage and racist preemptive imperialism: innocents abroad and taxpayers at home. 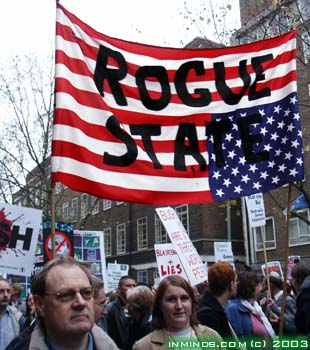 Some have estimated as food stamp recipients increase and the national life expectancy falls behind numerous countries, that about $660 billion have been allocated for the Iraq and Afghan colonial, imperialist wars. Almost 4% of G.D.P. is spent on the obscene military and current wars. If one adds the roughtly 30-40Â  billion spent on terrorist,Â spy intelligence agencies such as Â C.I.A., N.S.A., and the egregious N.A.S.A. space colonisation agency and the Department of Energy that runs the nuclear stockpile,Â budgetary outlays would approachÂ about $1,000,000,000 a year on war or security related matters. Oh yeah, throw in the farcical, obscene Department of Homeland Security.

The great America is coward America. The great empire is so afraid of the big, bad world, that it feels it has to control it and dominate it. What other nation expends these type of monies for the illusory goal of total security? A nation born of genocide against the aboriginies, the nation that feasts on war for its self-image and the hauteur of American exceptionalism is hooked on fear as an excuse for domination but the domination leads to resistance such as 9/11 which leads to more paranoia and more waste of our nation’s declining wealth on such egregious and immoral adventures of nationalistic excess.