The AAUP Shared Governance Conference in October will be the venue.

Ten years ago Kirstein was sanctioned in the most controversial academic freedom suspension case of the 21st Century. It resulted from an antiwar e-mail response to an Air Force Academy cadet. Paper will focus on shared governance challenges arising from the case and the contrasts between FIRE and AAUP engagement. 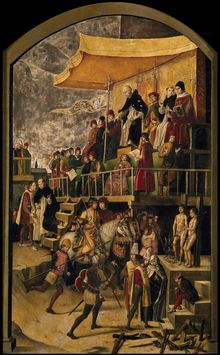 Representation of an auto-da-fÃ©, as depicted by Pedro Berruguete (around 1495). From TheFreeDictionary

To be silent is to lie and I will not lie and will not be silent and have not been for a single day in the decade following my auto-da-fÃ©.